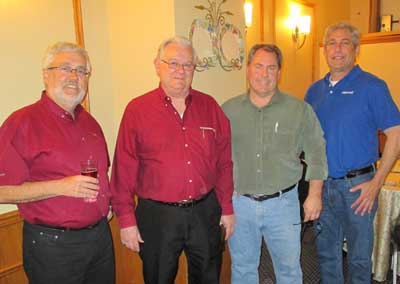 Jim Colter, Chairman of the Board for Colter & Peterson, has retired from the U.S.-based distribution company after a career that began in 1955. Upon completing high school, Cotler began working for his father’s company, Roy Colter Cutting Services.

While active in the business, Colter primarily focused on the parts and service end of Colter & Peterson (C&P), while Bruce Peterson focused on sales and operations. The two companies had merged in 1991.

Together with Jeff Marr, Eric Peterson and Donald Shields, the group of five built C&P to become what is described as North America’s largest independent distributor of paper cutters and paper handling equipment with five offices across the United States.

“When I think back about all the years, I really enjoyed meeting with people and creating relationships with them,” stated Colter. “When I first started in the business, there were over 4,000 binderies and printers working in New York City alone. You could go door-to-door and there would be three or four machines broken in any shop that needed to be worked on and fixed.

“I did a lot of interesting work on a variety of paper cutters, especially with Lawson and Seybold,” he continued. “I liked taking a machine apart and putting it back together and having it work the correct way.”

After Colter and Peterson merged in 1991, the business moved across the river to its current base in Paterson, New Jersey, in 1995, but Colter himself continued living in Queens and made the 33 mile commute each way for the next 19 years.

“I could not have asked for a better partner for the past 23 years,” stated Bruce Peterson. “We have not been just partners, but have also been good friends. Jim is the kind of man that would give you the shirt off his back and offer to help with any problem. All of us at C&P wish him well in his retirement.”

With approximately 50 employees, C&P is the manufacturer of the Microcut line of retrofit back gauge controllers and the worldwide distributor of Prism and Saber paper cutters, as well as C&P and Schneider Engineering Peripheral equipment. The company also is the North American distributor for Horauf and C&P Accutrim three knife trimmers.