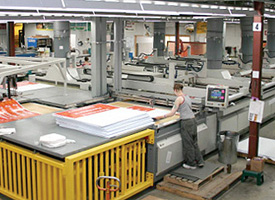 The machine’s throughput is rated at 1,182 ft2/hr in express mode, 582 ft2/hr in production mode and 390 ft2/hr in high-quality mode. The 4-colour system, which also comes standard with a white channel, runs at equal speeds in both binary and grayscale modes, at resolutions of up to 1,200 dpi.

The :Jeti 1224 HDC FTR also features a linear motor-driven vacuum bed to assist with dot placement in both flatbed mode or with the optional flat-to-roll (FTR) feature. The flatbed mode can print on anything that is up to two inches thick.

“[With the new :Jeti], we are able to run close to 100 percent of the work in a standard six-pass mode which delivers as promised. We also run a fair bit in four-pass,” said Ian Stirling, Technical Services Manager at Cowan Imaging Group. “From our experience, thus far, the roll functionality is good. We have even run heavy material from a six-inch supply core and taken it up on a three-inch core – a fairly demanding application.”

Bud Cowan and Muriel MacMillan began Cowan Imaging in 1945 out of a small Edmonton location. Today, Cowan Imaging describes itself as one of Canada’s largest screen printing and digital graphics company. In 2003, the family-run business acquired the assets and operations of Edmonton’s largest wide-format production facility.

In addition to its main facility in Edmonton, Cowan Imaging runs satellite offices in Calgary, Saskatoon and Toronto.

According to Agfa Graphics, the :Jeti 1224 HDCFTR is suited for flatbed applications like high-resolution trade show graphics, point-of-sale displays, real estate signs, backlit signs, lenticular displays, and banners – with the ability to print on materials like wood and ceramic tiles.