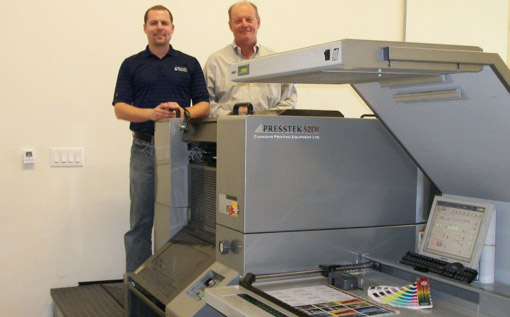 Canadian Printing Equipment (CPE) has been named as a full-line distributor of Presstek printing technologies in Canada, which adds to the company’s existing footprint in the sales and services of CTP, digital and offset products, as well as bindery equipment – both new and used.

“Seamless production without the burden of a CTP device is very appealing for the next generation printer,” stated Wes McCallum, Technical Specialist for Canadian Printing Equipment, in relation to the new distribution deal. “Presstek’s waterless DI series is a critical production solution that needs to be seriously considered before acquiring a new toner box or traditional press.”

Under its new agreement with Presstek, CPE, based in Winnipeg, Manitoba, will be able to sell the recently released Presstek 75DI press with an image format of 23 x 29 inches, available with inline aqueous or UV coating. In addition to the 75DI, Presstek also smaller-format DI presses, CTP systems, plates and associated workflow software. Presstek is based in Hudson, New Hampshire.