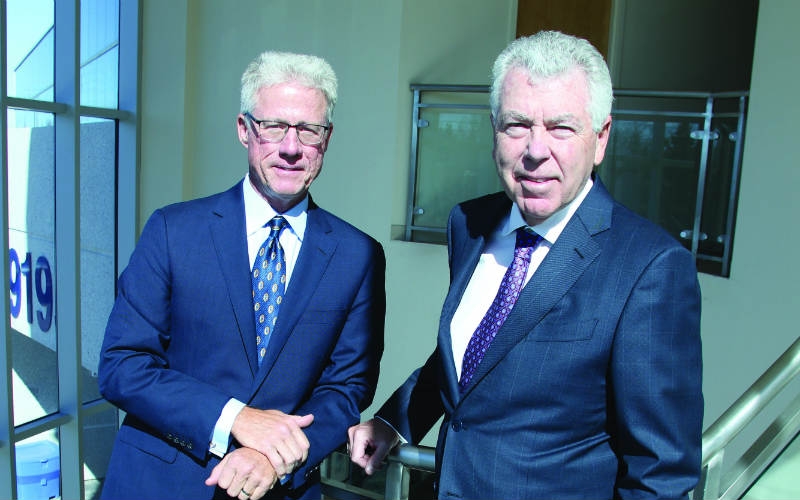 Michael Sifton and Greg Cochrane are reshaping a legacy company to become one of Canada’s most-formidable managed communications providers by leveraging print and strategic acquisitions.

For the past two years, DATA Communications Management has been entrenched in transformation, perhaps best signified by this new name for the 58-year-old company that is historically associated with printing business forms. The change to DATA Communications Management from The DATA Group in the summer of 2016 seems trivial, but, at that time, the public printing company – one of just a handful in Canada – also consolidated all of its issued and outstanding common shares and began trading under a new TSX stock symbol, DCM.

The transformation of DCM is a story of powerful investors who have influenced Canada’s printing industry for a couple of decades, mergers and acquisitions, reorganizing a national footprint and investing in a unique service platform run by highly skilled employees. Leaning on the printing legacy of one of Canada’s largest and longest-surviving document producers, DCM is now positioning itself as a managed communications provider with leadership expertise in marketing services.

The company’s position pits it up against North America’s largest printers and technology suppliers who have a growing interest in the cash cow of corporate print consulting. This is driving DCM to build a breadth of printing services to, as the company’s rebranded homepage explains, become The Execution Engine for Business Communications.

Rounding out print
“The business has been in transition for many years, giving credit to prior management. They acquired, stitched together and moved the business forward in a lot of different ways,” says Michael Sifton, who has served as the Chief Executive Officer of DCM since April 2015. “That being said, what we did was amp up the rate of change in the last two to three years.”

DCM’s current evolution leverages a sticky printing infrastructure relied upon by some Canada’s largest financial institutions, from where most of its revenue is still generated, accounting for approximately $130 million in its most recent fiscal year. To increase the breadth of its printing capabilities, DCM has made key acquisitions like February’s share purchase of Thistle Printing and substantially all of the assets of Eclipse Colour & Imaging. The acquisitions came after Sifton spent two years rightsizing the company, which reduced DCM’s production footprint from nine facilities to just five, which the company today labels as Centres of Excellence – in Brampton (headquarters) and Mississauga, Ontario; Calgary, Alberta; Drummondville, Quebec; and Niles, Illinois.

“We are absolutely more focused than we were before and we are more optimized. One of our big initiatives is to become more united because we were disparate parts and not really working together with a mission,” says Sifton. “We are much closer to that today.”

DCM’s core capabilities include direct marketing, print services, labels and asset tracking, event tickets and gift cards, logistics and fulfillment, content and workflow management, data management and analytics, and regulatory communications. In addition to leveraging an executive team with vast M&A experience, DCM is heavily focused on firming up processes and systems to get the most out of what is now one of Canada’s largest and most diverse printing operations.

In January 2016, DCM revealed it had invested $6.7 million to acquire multiple new Xerox presses, including several top-tier iGen 5 machines. In late-2016, DCM completed an additional $2.1 million investment in its printing platform with an emphasis on label production, with upgrades and technology enhancements to systems in Brampton. As it made these platform investments, DCM also realized the consolidation of its facilities, including moving its Regina manufacturing and warehousing operations into its flagship Calgary facility, which had already absorbed the company’s Edmonton plant.

The Calgary location, which also holds significant sheetfed offset capabilities, most recently began to absorb the wide-format capabilities of DCM’s Mississauga plant following on the purchase of Eclipse located in Burlington, Ontario. Eclipse specializes in large-format and point-of-purchase printing with approximately 100 employees operating in an 80,000-square-foot facility. This $9.2 million acquisition turns DCM into one of the country’s most significant large- and grand-format printers. Eclipse generated approximately $21.3 million in revenues (unaudited) for the fiscal year ended November 30, 2016.

“They also have a growing packaging business, especially in specialty packaging, so we are quite happy about that,” says Greg Cochrane, who became DCM’s President in November 2016. “We see three growth areas: large format, packaging and labeling.”

The $6.1 million purchase of Thistle in Toronto provides DCM with commercial printing capabilities in a location that better aligns with its critical customer base in the financial heart of Canada. “Thistle is a steady, classic commercial printer. What that allows us to do here in Eastern Canada is to have, under one roof, our complete litho and sheetfed operation,” says Cochrane. “Currently, we are outsourcing a lot of that to second-party vendors, maybe some of our competitors, but this allows us to do more inside. We repatriate the business.” With approximately 65 employees operating in a 42,000-square-foot facility, Thistle generated $16.4 million in revenues (audited) for the fiscal year ended October 31, 2016.

As it closed the acquisitions of Thistle and Eclipse, DCM also arranged an increase under its senior revolving credit facility with a chartered bank by $10 million to up to $35 million. The move provides DCM with a total borrowing base of up to $72 million from $50 million, suggesting its investment-savvy executive team will continue to make acquisitions. “There are opportunities on the [printing] side of the spectrum that we need to tuck in and we think that they are trading at favourable multiples today,” says Sifton.

Leveraging growth experience
In DCM purchased Thistle from private equity firm VRG Capital Corp., perhaps best known for its financial backing of PLM Group, which was eventually purchased for $130 million by Transcontinental in 2007. Cochrane in 2011 became a Managing Partner of VRG Capital, which also holds an interest in DCM. The company publicly disclosed the Thistle purchase after receiving opinions on what was determined to be fair market value.

Cochrane actually began working with DCM in June 2016 as a Director of the company (stepping down from his board position in November to fulfill his mandate as President), along with VRG Managing Partner J.R. Kingsley Ward, who currently serves as DCM’s Chairman of the Board. It was also around this time, as the new DCM entity came into existence, that Sifton made his own sizable investment in the company, approximately 10 percent, along with Cochrane at a lesser amount.

“I bought in during the springtime last year in a fairly major way. Greg just recently took more shares as part of a transaction and is interested in making larger commitments to this company,” says Sifton. “So we are committed. We believe in its future and it is a company that is going to continue to go through transitions. There are going to be some bumps and grinds along the way but we think the prize is worth it.”

With the arrival Cochrane, Sifton shifted his CEO mandate with DCM to focus on financial and strategic initiatives. Cochrane meanwhile is putting his knowledge toward sales and business development. “I am a real execution type,” he says. “There is no such thing as better strategy just better execution.” At age 65, Cochrane provides a diverse background with decades of experience in marketing services, communications, event management and private equity investment.

After beginning his marketing career in product management with General Electric and then S.C. Johnson, Cochrane in 1981, along with his business partner, built out one of the largest Canadian event and conference companies, Mariposa Communications, which was sold in 1997 to Mosaic Group. In 2001, Cochrane became a lead investor in Pareto Corporation, a start-up marketing services business which became publicly listed in 2004, and where he remained a director until its sale to U.S.-based private equity firm Riverside Company in 2011 for $125 million.

Pareto would eventually shut its doors in late-2013, filing under Canada’s Companies’ Creditors Arrangement Act, which new owner Riverside described as a result of a sluggish economy and increased competition in the shopper marketing space. Also described as sales activation, the term shopper marketing is based on methods to connect brands, retailers and shoppers before, during and after a sale, which can include a plethora of print for direct marketing, experiential marketing, events, sampling programs, retail merchandising, in-store messaging and other incentives.

With operational responsibility for the direction of DCM, Cochrane views the company as holding two primary business arenas. “The first part is what I call the rinse-repeat. It is forms. It is long-term contracts it is RFPs with major [financial institutions] and insurance businesses,” he says, acknowledging a decline in the printing of transactional forms, although DCM is also entrenched with the same clients’ use of electronic options. “As that [print] is declining you better be best in class in terms of costing, on time, and we aren’t paying for any extras. So that part of the business we are really good at it. There are only a couple companies that can do it here in Canada.”

Cochrane refers to the other part of DCM business as customized on-demand, which relies on printing processes like digital, large-format, labels, packaging and direct mail – even sheeted with DCM’s new lithographic assets. “Those are the types of things that are growing… And the recent acquisitions we have made really bolster those areas for us,” he says. The customized on-demand part of DCM is where Cochrane’s marketing background comes into to play based on evolving client purchasing patterns.

“People who are around the room are not only in procurement but also marketing,” says Cochrane. “The [sales] conversation 10 years ago is totally different than it is today.” He explains the marketing executives of large clients are now involved in the complete process, often asking DCM to work directly with agencies on campaign details. “Yes, this is complex, but we are in the business of simplifying the complexity of your communications needs.”

Cochrane uses the term “to stand the client up” to describe DCM’s value-add approach, as he recalls one recent example: “With all of their requests it took 150,000 lines of code to get them up and running, so we could deliver materials on time.” In fact it was this same marketing executive who remarked on the true nature of DCM’s services. “The customer said, ‘Actually what you guys are is a managed services provider.’” With Cochrane’s experience and millions of dollars invested in new printing infrastructure, DCM is a formidable managed communications provider supported by marketing services potential and decades of process knowledge.

“I knew nothing about DATA when I was first approached about the opportunity a couple of years ago,” says Sifton. “The one thing that keeps coming back to me is just how great the folks are in this company and they are worth us putting a shoulder behind it to make it work.”