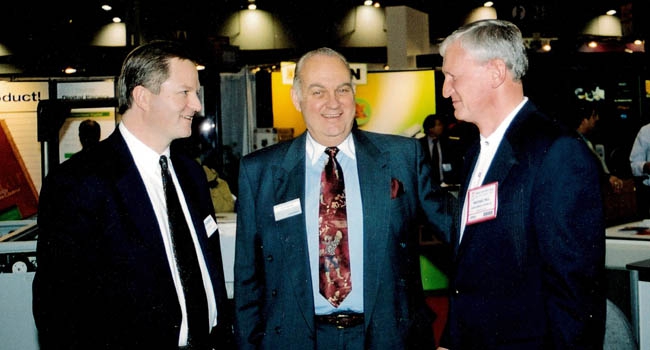 David Walker, an important figure in Canada’s printing industry for decades, recently passed away at age 80 after suffering a stroke. Born in Toronto in 1935, Walker was well known as the long-serving President of Louson-Desonite, a former significant technology supply company based in Don Mills, before eventually moving into a sales position for Heidelberg Canada.

Walker devoted much of his energies to developing Canada’s printing industry through association and educational initiatives. He served as the supplier representative on the Board of Directors of the Canadian Printing Industries Association (CPIA), where he also led the CPIA Awards Committee. He became an Honorary Member of the CPIA in 2005.

“Everyone who knew Dave, recognizes the valuable contributions he made to the printing industry and to the CPIA,” shares Harmony Printing’s Ruby Thomas, former Chairperson of the CPIA and President of the Ontario Printing Industries Association. “His dedication continued even after he retired through his participation in Wayzgoose…  Dave was a true gentleman.”

Walker joined the Honourary Society of the Wayzgoose in 1999, three years after it was founded, and served as Chairman from 1998 to 2000. For the past 14 years, Walker was an active member of the Wayzgoose nominating committee and a driving force of its membership.

“It is difficult to find the right words defining how very influential he was for so many people. He was a mentor, a leader, an inspiration and for most of us a trusted longtime friend,” says Willy Wilkins, former leader of the CPIA, who worked closely with Walker through Wayzgoose. “The Honourary Society of the Wayzgoose will never be quite the same. Dave was dedicated and almost driven to keep the Society strong and growing.”

“Dave was such an imposing industry figure for a long time. He always seemed to be present at any and all events,” shares John Greenhough, former longtime leader of The Data Group, who served on several association boards with Walker, in addition to his Wayzgoose involvement. “He had a serious but yet light hearted style that always contributed to the occasion. We will all miss his marvelous delivery of grace at our dinners and lunches.”

Walker was also one of the founding members of PESDA, an advocacy group focused on the position of technology suppliers in Canadian printing. He became President of PESDA in 1984 and was active in that organization until 2000. Walker is also noted for spending many years helping to raise funds and awareness for the Canadian Printing Industries Scholarship Trust Fund, which continues today.

“Dave always stood out in my mind as a person you just couldn’t help but like,” shares Dennis Lynch, former head of Ernest Green & Son. “He knew how to enjoy life, made time to give back to all who called upon him, while balancing his business. I had many occasions over the years to spend time with him and was always impressed with his warm and friendly personality.”