DeJong Printing Ltd. has bought a new 29-inch, 6-colour Komori Lithrone SX629C, with tower coater and extended delivery, to be installed this November in the commercial printer’s Edmonton, Alberta, facility. 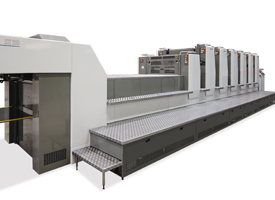 The new press will be DeJong Printing’s third new Komori press in the last seven years. Founded in February 1979, DeJong began to modernize its printing infrastructure in 2004 with the installation of a new Komori Lithrone 628c, which is a 20 x 28-inch press with inline aqueous coating. A year later, the company began producing Staccato screens with the Komori and then, in January 2006, DeJong installed a new Komori Spica.

In May 2009, DeJong began to build up its toner production capabilities with the purchase of a 12 x 18-inch Xanté Ilumina 502, primarily to focus on work like business cards, postcards, brochures, posters and booklets, which will now be supported by the new NexPress – running a 14 x 20-inch sheet size and Kodak’s fifth printing unit.