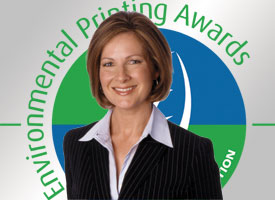 Swain is the winner of the prestigious B’Nai Brith Canada Prize for human rights reporting, two-time Gold Medal winner at the New York Festivals, and a two-time winner of the Michener Award for public service in journalism. She is currently the host of CBC’s flagship local news show, CBC News at Six Toronto and is also the alternate anchor of The National.

Celebrating its fifth year, the Environmental Printing Awards is a program set up to recognize the best of environmentally progressive printing in Canada. The deadline to enter the program is March 19th, which is also the last day to purchase early-bird tickets.

To celebrate the fifth year of the program, the awards gala features a keynote addressed by the CEO of the David Suzuki Foundation, Peter Robinson. The inaugural gala was hosted by Dr. David Suzuki, followed by notable speakers the Right Honourable Brian Mulroney, Stephen Lewis and Tzeporah Berman.