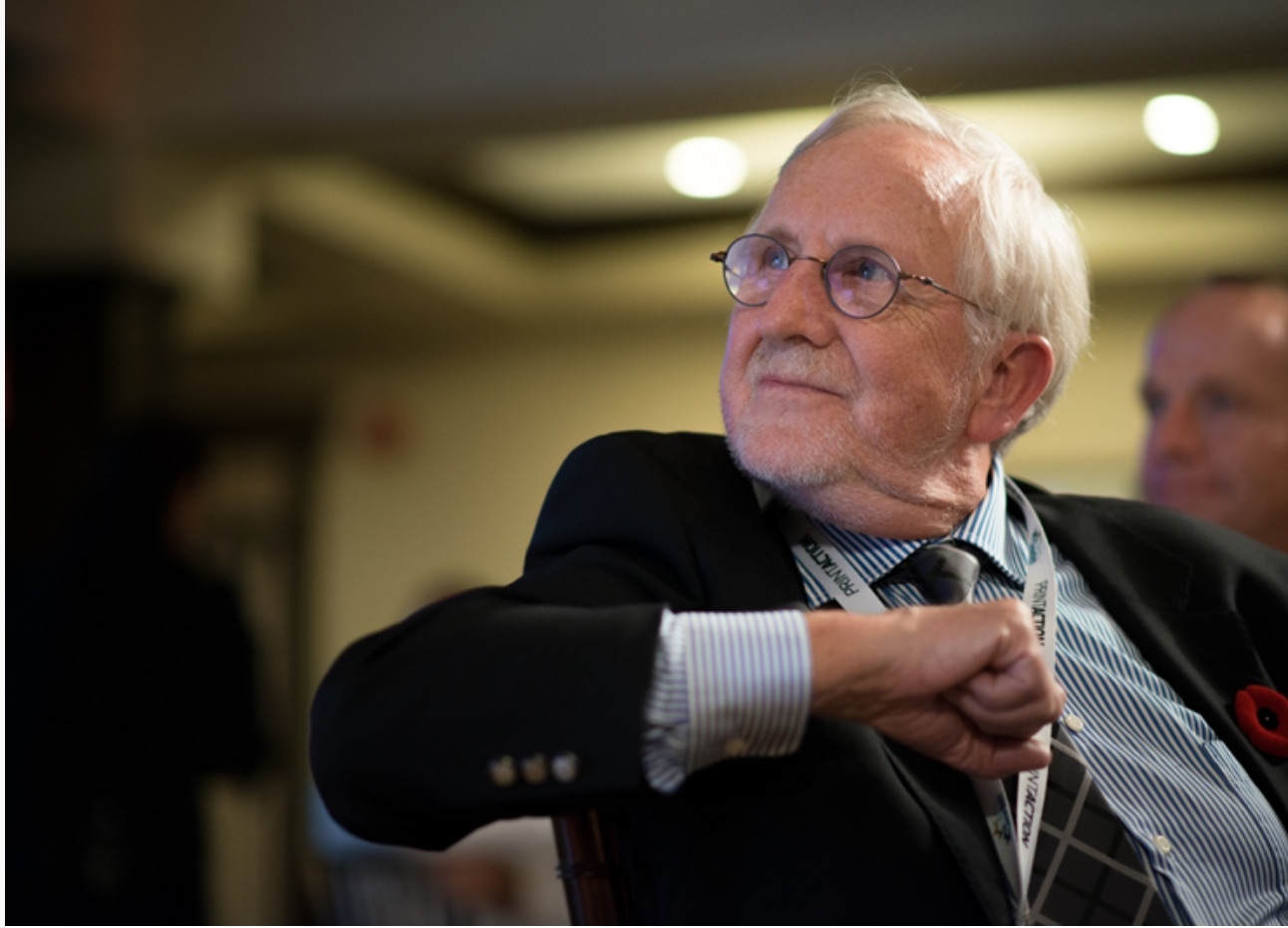 Dick Kouwenhoven, one of the icons of Canadian printing for more than four decades, passed away on April 25. Kouwenhoven was the Founder, Chairman and Chief Executive Officer of Hemlock Printers Ltd., based in Burnaby, BC, one of the most highly revered commercial printing operations in North America and indeed known throughout the printing world for its industry leadership.

Kouwenhoven was Hemlock’s Chairman and CEO for the past four years after stepping down from running the company’s day-to-day operations for the previous 47 years. Less than a year after immigrating to Canada from The Netherlands in 1961, Kouwenhoven began to form what is now recognized around the world as a trailblazing printing company not just in terms of its high-end sheetfed perfecting capabilities, digital printing prowess and adoption of cutting-edge imaging technologies, but also in its environmentally progressive position.

Kouwenhoven was diagnosed with esophageal cancer a little more than a month ago. Describing his father as “a gentle person who quietly went about his business,” Richard Kouwenhoven explains his father remained active in life and business until the family understood how aggressive the cancer was.

“He set an example for so many people in our industry. Within Hemlock, he set a tone, an ethic that is held throughout our business today. It is part of our identity and it came through all of his dealings in the industry. The example he set is going to impact our industry for a long time,” says Richard, President and Chief Operating Officer of Hemlock.

In a letter sent to industry colleagues last night, Richard shared that he, along with his mother Clara and sister Vanessa, were by Dick’s side when he passed; that his brothers Frits, Bill and Frank were able to spend precious time with him while he was in hospital. “Myself, Frits and members of our Leadership Team met with the Hemlock staff today,” he wrote, “We shared our deep sadness and appreciation for his amazing vision, energy and leadership that created the special community we experience every day at Hemlock. We also thanked him for the legacy that he leaves behind and the wonderful example that he has set for us.”

Plans for a family funeral service as well as a celebration of life are underway. The celebration of life event, which will be open for staff, industry colleagues and friends, will likely occur at the latter part of May, explains Richard, but the venue and exact date have not yet been determined.

The following excerpts are taken from Dick Kouwenhoven’s speech in December 2015, when he received PrintAction’s Lifetime Achievement Award, answering questions he was commonly asked about his life in print:

How did you get into the printing trade?
As most of you know, I was born in the Netherlands, in a beautiful old city named Delft. My hometown became a city in 1246, about 250 years before Columbus ran into North America, on his way to Asia.

In the 17th century, Delft was famous for brewing the best beer, in numerous small breweries, but also for printing beautiful bibles. It is said that the number of breweries were equal to the number of churches in the city. That was reasonable balance to secure continuity for both industries.

I was born during the Second World War, as the ninth child of what would become a family of 12 children. Big families were very common in the Netherlands at that time. The Netherlands was occupied by Germany at that time. My older siblings (some in their teens) were in hiding to stay out of view. They were understandably very difficult times for all people in Holland. One of my first memories was the joyful crowds in the streets, with Dutch flags flying, when the country was liberated in early May of 1945. I was three years old, but I have a clear image of that scene of hundreds of happy people in the streets after spending most of my early years inside the house.

My father was a contractor/builder; second generation, continuing in his dad’s footsteps after he passed away. We had an impressive carpentry workshop behind the house, and as small kids we managed to get into the shop frequently. They made beautiful wooden windows and doors, heavy, structural stuff. We knew the craftsmen by name, and we were shown how they shaped the wooden components, and joined them with wooden dowels.

I knew at an early age that I wanted to work with my hands, creating beautiful stuff. My Dad did carpentry work for a local printer occasionally, and he was always fascinated by what he saw there. When I started to miss my marks in High School, he encouraged me to take a look at the printing trade, and arranged an interview. I learned about the practical combination of 4 days at work and 1 day at school, with a diploma after 5 years. So I became an apprentice compositor, signing my life away with a 6 year iron clad employment contract.

My Dad deserves much credit for his skills as a career councillor. I loved the work, the rapid learning curve, and the comradery of the workplace, much more than being a full time student.

When and why did you immigrate to Canada?
After eight years of learning and working in the trade in the Netherlands, including courses in estimating and accounting, I took the step (together with my brother John) to immigrate to Canada. That was not a big deal, because we already had three brothers who were established in Vancouver.

Much to my surprise, I found employment the day after I arrived in Vancouver, and started work on the following Monday. Too fast, I found, but they needed a typesetter desperately.

When did you start Hemlock Printers?
About six months after my arrival, I was approached by a gentleman who had just purchased a small storefront printery by the name of Hemlock Printers. He had no previous experience in printing, but he had great contacts in the business community, and could fill that little place with orders, no problem. All he needed was an all-round typesetter/printer who could make things happen in the shop.

So I accepted, and worked hard to keep him and his clients happy. He learned about selling print, and I learned about managing expectations, and deliver nicely printed letterheads, envelopes, business cards and wedding invitations etc. on time.

In fairly rapid succession, I invested some money, and became a 50% partner. I learned that a partnership is a poor ship to sail on, and I bought my partner out in 1968, incorporated the little company, borrowed some money, installed some new, better presses, and hired some staff, and moved to larger premises.

Looking back, what were the major events that put Hemlock on a path of growth?
With a move to larger premises just about every 5 years, we again faced a move from about 15,000 overused square feet in 1986. This time there were installations of some new and bigger presses involved and a big pre-press department to feed a total of 17 Heidelberg Speedmaster units. We were fortunate to find just the right place just a block away.

It was big. Too big at first glance. At 54,000 square feet, it looked like an airplane hangar. “We’ll never grow out of this one” was the conclusion of our staff. And they were right. We are still there after nearly 30 years.

Coinciding with an economic boom in Vancouver just before and after Expo’86, Hemlock experienced more than 20 percent growth per year in succession – with this growth in business, our team, our capacity and our capabilities expanded with the demands of the local market we served.

What are some things that make you proud of Hemlock’s success?
During the 47 years since 1968, we were fortunate to make so many friends in the industry and to build lasting relationships with customers, suppliers, employees and the larger community. The quality of our work and service standards make us proud, every day. In my daily walk through the plant, I am in awe of the dedication of our staff to serving our clients to the best of their ability. Our clients know it. There is a passion to excel that you can see and feel.

We have adopted and refined our environmental and social sustainability commitments, and shared our programs and practices freely, to help us all towards a better tomorrow. While it takes time, effort and investments, we feel that we must continuously improve.

I am also proud of the contributions of my family who have played such an important role in Hemlock’s success. Clara, my sweet wife of 48 years, my dear brother and business partner John, who passed away in 1997, dynamic brother Frits, selling up a storm in the USA, Richard responsible for day-to-day from the corner office, and all others who support our efforts.

What does the future hold for Hemlock?
Under Richard’s leadership, we will be expanding our on-line presence and facilities. Our well-oiled fulfillment centre will be expanded in response to increasing demands. And always stay the course with our employees and all our stakeholders to maintain Hemlock’s values and principles, which are pivotal to its continued success.