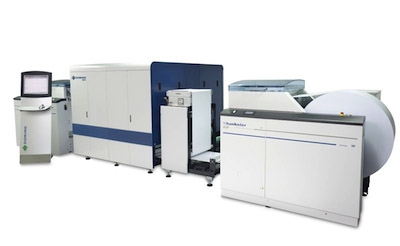 Domino Printing Sciences states it has entered into the transactional, direct mail and book printing markets with the launch of the K630i monochrome printing press. The machine is being introduced at Hunkeler Innovation Days, running from February 23 to 26 in Lucerne, Switzerland.

“The K630i is a natural progression in digital printing for Domino after launching the K600i digital module in 2010, and the four colour N600i digital label press in 2012, now available as the N610i in up to seven colours,” said Philip Easton, Director of Domino’s Digital Printing Solutions Division. “The K630i is based on the same proven technology that has seen both these products take leadership positions in their respective markets.”

The K630i is evolution of the Graph Tech AG MonoCube product that was first released in 2012, just before Domino, already a shareholder, acquired the remaining shares of the company. There are currently four installations in Europe and North America, each running between 2- to 12-million A4 impressions per month. Domino states a further five K630i presses are now on order.