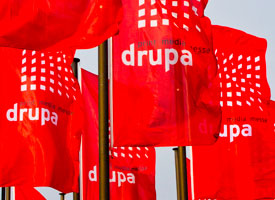 The organizers of the world’s largest print-centric trade show announced they will stay with a four-year schedule, despite some discussions about going onto a three-year cycle. The next drupa, slated for May 2016, will be three days shorter, however, spanning only 11 days instead of the traditional 14. The timing and duration were discussed at a 20-member meeting held last Friday.
“Visitor structure at drupa has changed. While in the past large groups travelled to the trade fair – preferably at the weekend – drupa is now increasingly developing into a  B2B fair with a high proportion of top decision-makers,” said Werner Matthias Dornscheidt, CEO of Messe Düsseldorf. “At this year’s drupa, 78% of the international visitors and 52% of German visitors came from the top management; respectively this is 4% and 5% more than in 2008. This makes it unnecessary to hold drupa during two weekends. With eleven days – one weekend and nine working days – we perfectly cater to the needs of both supply and demand.”
The CEO of KBA, Claus Bolza-Schünemann, will be the show’s Chairman for 2016. “I am delighted to assume the Presidency at such an exciting time. Our sector is developing at a rapid pace and drupa 2016 will represent a key milestone on the path into the future,” stated Bolza-Schünemann.