Fujifilm announced plans for its drupa presence to an international group of trade journalists in Dusseldorf today. The company, in its 2,020-square-metre booth, will debut eight new products under the theme of “Power to Succeed.” Among these products is a new folding-carton press, based on the company’s Jet Press design. 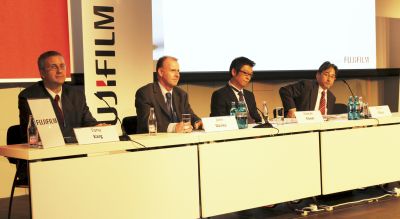 The yet unnamed press will be similar in size to the Jet Press 720 system, but will produce print on carton stock. The company says its target market will be short-run packaging, up to 1,000 sheets. The B2-format machine will be shown on the Fujifilm booth, and company officials promise it will make its commercial debut sometime in 2013.

Fujifilm also announced it will be entering the flexo plate imaging market with a product called the FLENEX DLE. According to Fujifilm, compared to the common laser ablation mask system, the FLENEX DLE is not only faster, but more environmentally friendly, with no VOCs released in the process. The system will launch with a platesetter called FLENEX DL-25 and a DLE plate called FLENEX WV-1.

On the consumables front, Fujifilm will introduce a new line of UV inkjet inks called VIVIDIA. Its characteristics are created for commercial and packaging segments. The inks will be used by the Jet Press 720 and the as-yet-unnamed B2-size carton printing press. The company will also add a new long-run thermal CTP plate to its low-chemistry line called the Brillia HD LH-PXE. The plate promises print runs of up to 500,000 unbaked and 1,000,000 when baked. The long runs are possible through a new double layer emulsion and are processed using Fujifilm’s ZAC processors.

On the topic of processors, Fujifilm will also launch the XR-1200F at drupa. It is a developer waste reduction and water re-use system, which separates plate chemistry into concentrated waste and distilled water. Waste volume is reduced as much as 90 percent, according to Fujifilm.

Fujiflm’s XMF workflow software will also be updated for drupa. The XMF brand will be subdivided into four parts: XMF Workflow, now at version 5; XMF Remote, newly upgraded to version 5 to support mobile devices (iOS and Android) as well as HTML 5; XMF PrintCentre; a Web-to-print e-commerce system; and XMF ColorPath, which is a new cloud-based colour management tool that promises ease-of-use for non-colour experts.