At a press event promoting the upcoming drupa show, Heidelberg announced plans to debut a new line of presses at the quadrennial trade show. The new Heidelberg Speedmaster SX is intended to slot between the existing SM and XL series,

Heidelberg CEO Bernhard Schrier made a presentation to journalists worldwide along with management board member Stephan Plenz.
According to the two, the company will show 60 pieces of equipment in its Hall 1 booth.

Among the new announcements was also the news that Heidelberg plans to rebrand offerings from Ricoh into its Linoprint series: it will be offered as Linoprint C series. An internally developed packaging printing line, containing technologies from its acquisition of CSAT GmbH and Gallus, will be known as the Linoprint L series. Existing Linoprint models will be discontinued.

At drupa, Heidelberg
will be showing the Linoprint C901 and Linoprint C751 machines. A Linoprint L model based on the CSAT 600 will also be shown. 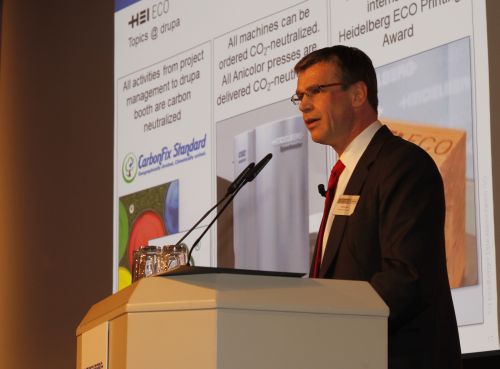 The newly announced Speedmaster SX line will be small (35×50 cm to 70×100 cm) format and contain technologies seen in the recently introduced Speedmaster CX series, itself a technology transfer from Heidelberg’s XL flagship line.

A final new announcement to journalists is the increased focus on carbon neutrality through its HEI Eco banner. According to Plenz, all Heidelberg machines can be ordered CO2-neutralized, with all Anicolor presses delivered that way.

Plenz and Schreier announced that more announcements will be in store for drupa visitors this May.

“There are indications that investment in our sector is once again picking up in the USA,” announced Schreier. “The investment bottleneck is finally starting to clear. That is why we expect our customers to increase their investment levels and thereby boost our order books considerably.”