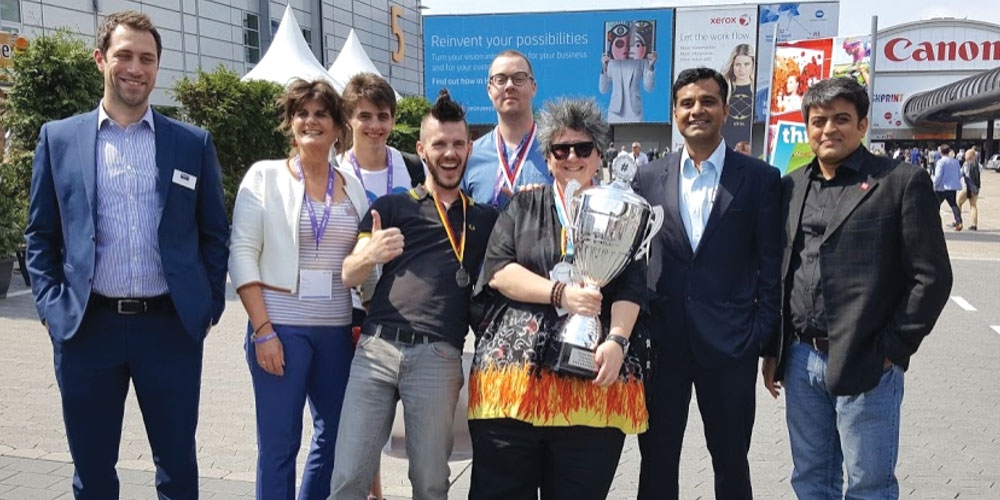 The 10 top non-tech highlights of drupa 2016, which has always been much more than a product exhibition

drupa, the world’s biggest and most important trade show for print and media, has operated in Düsseldorf , Germany, since 1951. Results from its latest installment, held over 10 days from 31 May to 10 June 2016, confirm the show’s continued commercial viability: Out of 260,000 visitors from 188 countries, 54 percent came with concrete plans to invest, 29 percent placed orders at the show, 30 percent plan to place orders afterwards, and fully 60 percent found new suppliers from among the show’s 1,837 exhibitors from 64 countries. Aside from the trade show’s commercial success, in its 65 years of existence, drupa has also evolved a distinctive culture and traditions which are highlighted in this article, along with some uncommon events at this year’s show.

#1 Small d
drupa’s predecessor, another German exhibition called BUGRA, was held in Leipzig from 1914 until 1949, when Germany was partitioned, Leipzig became part of East Germany, and Düsseldorf  was chosen to host a new show called Internationale Messe Druck und Papier. This title was shortened first to Druck und Papier, then to DRUPA. The show premiered in 1951, when letterpress still dominated the industry. Later, in 1997, the format of the name was changed to drupa in keeping with the contemporary trend of using lowercase letters for brand names. To this day drupa still begins with a small letter d.

#2 drupacity
Because Düsseldorf is famous for its lively modern art and cultural scene, drupa organizers Messe Düsseldorf work in partnership with Destination Düsseldorf, the local tourist authority, to organize an array of drupa-themed educational, cultural, and recreational attractions in which not only international visitors but also Düsseldorf  residents can participate during drupa. This year’s offerings included:

• Welcoming teams of “drupauls” and “drupaulas”, multilingual guides dressed all in red, stationed at strategic locations,
• “Wolfgang”: a Berlin-style double-decker bus converted by the GoetheLab at the nearby Technical University of Aachen into a mobile, hands-on, 8-station 3D-printing laboratory,
• 3D-printing demonstrations in shopping malls and department stores, plus a drawing contest in which winners receives the subject of their drawing as a 3D object,
• Another contest to win one of 100 3D-printed portraits,
• Mr. Lo’s Papershow, a revival of an old-time variety act involving paper tearing,
• A fashion collection made entirely of paper by students of the Mediadesign Hochschule, and
• Other printing-themed art and photography exhibitions and lectures

#3 Safety first
The international media gave drupa 2016 unexpected attention because of two potential security threats that were both efficiently averted by local authorities. The first occurred on June 2nd, when German police arrested three Syrian nationals suspected of planning a mass-casualty attack on a busy downtown area of Düsseldorf on behalf of the terrorist organization ISIS. The men had arrived in Germany with the largely unregulated flood of migrants who have entered the country over the past two years.

The arrest was prompted by information obtained from a fourth Syrian man who was arrested in Paris after giving himself up to authorities in February and confessing to the plot. It took German investigators four more months to accumulate enough evidence against the other three men to arrest them.  No evidence suggests that the suspects had begun implementing their attack plans which allegedly involved aiming suicide bombings, guns, and explosives at crowds frequenting Heinrich-Heine-Allee, a main street with major public transport links and numerous bars and cafés that are popular with residents and partying tourists.

A second potential security threat occurred shortly after noon on June 7th, when a large fire broke out on the grounds of Düsseldorf ’s Exhibition Centre in hall 18, a former exhibition space recently used to house migrants. While officially the building housed 160 people, fire crews reportedly evacuated more than 250, who were subsequently moved to other accommodations. It took more than 70 firefighters to control the blaze that completely destroyed hall 18 and alarmed many nearby drupa attendees with its kilometre-high cloud of black smoke. However, drupa was unharmed by the blaze. Local news outlets reported that two migrants were arrested and up to six questioned in connection with the fire.

#4 Historical printing
Among drupa’s wonders of modern technology, the Leipzig Museum of the Printing Arts showcased some of its extensive collection of historical printing equipment and products. Its show exhibits included a letterpress machine by Koenig & Bauer (1984), a linotype machine (1965), and a toggle press (1872).

#5 Celebrity legends and model presses
Another way in which drupa culture exhibits a reverence for history is in recurring celebrations by and for people with a longstanding presence at the show. One case in point is Indigo and Landa Digital Printing founder Benny Landa, who celebrated his 70th birthday with a party for over 500 guests on the night of Day 3. For the occasion, Landa chartered two planes to fly in all his employees from Israel who were not already working at drupa. Celebration highlights included viewing a “this is your life” video by Landa’s staff, outlining his childhood in Canada and his achievements of launching Indigo, Landa, and the nanographic technology his company builds today. Among Landa’s family, Landa’s wife Patsy, and the senior industry executives who paid Landa tribute was his former colleague from Indigo, Alon Bar Shany, now the general manager of HP’s Indigo division. While presenting Landa with a working tabletop model of the original Indigo E-Print digital press, PrintWeek quotes Bar Shany as saying: “Without Benny there would be no digital printing industry and no drupa because it would have died a long time ago if it had just been about offset.”

Another drupa party celebrated the 90th birthday of Russian print engineer and media designer Vladimir Alexandrovitch Tiefenbach, hailed by drupa as a living legend for having visited every single one of the 16 drupas held since 1951. The birthday cake drupa presented to him was topped with a model antique press.

A third example of a drupa industry legend is Rochester Institute of Technology professor emeritus and printing industry expert Frank Romano who described his own status:  “I am now a veteran journalist. There are five of us, from US, UK, India, Italy, Germany, who have covered nine drupas or more. Number 1 had 14 drupas, I had 11, and the others had 9.”

#6 Social media smarts
In recognition of the growing prominence of social media as communication tools, drupa erected a social media booth at the north entrance of the fairgrounds, with seating and screens showing updated Twitter feeds and live video of interviews and demonstrations. Also at the booth, in exchange for a tweet including the hashtag #drupa2016, visitors and exhibitors were awarded an apple decorated with an edible impression of the same hashtag. Additionally, during the show drupa posted news updates to its own blog, as well as Twitter, Facebook, LinkedIn, and Xing accounts.

#7 Klaus
In an e-mail James Matthews-Paul of Output Magazine (U.K.) describes another of drupa 2016’s initiatives to encourage mentions on social media: “Each day, the @drupa social media and PR team determined the ‘best contributor’ on Twitter via some combination of volume, relevance, and effort and awarded them a trophy. The first winner was [American] Deborah Corn of Print Media Centr, who collaborated with HP on #PWPPartners for PageWide. As the inaugural recipient (and mad as a box of frogs), she anthropomorphised the trophy by giving it the name Klaus.

“Klaus was awarded at 4.30 pm every day. Companies then enjoyed the pleasure of ‘his’ company during the next day. I won on Day 7 and carried Klaus for |day 8. I took him on a trip to every one of drupa’s 19 gigantic halls! (It was generally agreed that nobody would be able to top that.)”

Corn comments by e-mail: “#Klaus became a celebrity at drupa and had many adventures with everyone who won him. The @drupa social media and PR team were instrumental in helping create and generate #Klaus buzz. By the end of drupa, #Klaus was the third most used hashtag included with #drupa2016 (according to stats from hashtracking.com).”

Corn says until the next drupa Klaus will reside in the office of Sabine Geldermann, director of drupa, who took time out of her day to come to the #Klaus winners gathering and farewell to #Klaus on June 9th. Corn writes: “This all may seem a bit silly, but ultimately #Klaus brought together all the exhibitors in a way I have never seem before at any other event. #Klaus was the catalyst for common ground and common experience and fun because it wasn’t linked to any products and services. He really helped us to form a global social community around #drupa2016 whether people were present physically or not.”

#8 drupa theme song
Since 1986, each drupa has had its own theme song, which is played throughout the exhibition halls every morning at opening time. Historically, the songs have varied in styles ranging from country to power ballad to techno dance. The latest 2016 version, called “drupa is in town again”, is composed and played by Düsseldorf  songwriter/pianist/music professor Dieter Falk and performed by South African soul singer Bonita Niessen. At least the last two drupa songs are available for playback on drupa’s Website. Fujifilm’s Mark Stephenson has also created a Facebook page, The Cult of drupa Songs (www.facebook.com/drupasongs) in recognition of the show’s musical tradition.

#9 drupa food
Besides the #drupa2016 apples mentioned above and the fine cuisine of Düsseldorf  and Germany in general, drupa offered attendees a selection of special show-themed foods.  This year’s delicacies included druPRINTen, cookies modeled on the traditional imprinted spice biscuits called printen which originated in Aachen. The updated version of this gingerbread-like sweet, created for drupa by the local baker’s guild, featured place logos for decoration and was handed out gratis at a venues including the airport, hotels, and 100 bakeries. Other gastronomic attractions included “drupabases” serving daily tastings, welcome cocktails, or such free snacks as Altbier ice cream, made from Düsseldorf ’s own unique variety of beer, as well as restaurant vouchers and discounts for drupa attendees.

#10 Four-year cycle
In February 2015, drupa announced its organizing committee’s decision to hold the trade show every three years after 2016 (instead of every four years) in order to update visitors on new technology more frequently. Visitors said they preferred the shorter cycle. The change also offered the extra advantage of reducing stress on drupa’s exhibitors who specialize in package printing, since it meant that drupa would not run in 2020, the year scheduled for the leading packaging and process-industry trade show interpack.

Historically, in 2012 the committee vetoed a similar proposal to change drupa to a three-year cycle after receiving significant objections from drupa’s major exhibitors. And as it turned out this year, once again, in response to the demands of exhibitors at drupa 2016, the committee opted to stick with its four-year cycle in the interest of drupa’s customers and international markets. The next drupa has been scheduled from June 23 to July 3, 2020.