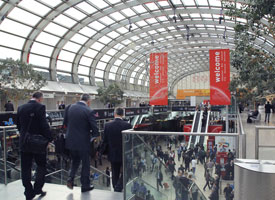 “This decrease does not come as a surprise for us and the sector as a whole. In Germany alone the printing industry lost some 3,900 companies with over 61,000 employees between 2000 and 2011. During the same time, more than 7,700 printing operations closed in the U.S.,” explained Werner Matthias Dornscheidt, President & CEO of Messe Düsseldorf. “Against this backdrop it is not surprising that fewer visitors came to drupa 2012. However – and this is the key point – customers now no longer come to drupa as large delegations or on group corporate trips. It is much more top managers who travel to Düsseldorf. drupa is clearly the decision-makers’ trade fair and the trade fair for business.”

Interim numbers from the organizer of drupa have revealed that attendance figures for the quadrennial show is expected to be roughly 20 percent lower than numbers from 2008. Despite this, the show reports the mood in its halls to be “good” with several vendors locking in concrete orders on the first day.

“drupa 2012 again demonstrated its outstanding function as a sales fair, a source of ideas and platform for the exchange of solutions and successful business models,” says Bernhard Schreier, President of drupa and Board Chairman at Heidelberger Druckmaschinen AG.

According to the organizer, at the half-way mark of the show, some 170,000 people from 115 countries visited the show’s 19 halls. The show saw increases from the Central American and African regions (up 1.1 percent and 1.4 percent, respectively). “These figures show we reflect the situation in the sector. In view of the far-reaching structural change in the European and North American print and media sector we had to assume this drop in visitor numbers,” said Werner Matthias Dornscheidt, CEO at Messe Düsseldorf.

The show, in which 1,850 exhibitors from 52 nations participated, concludes tomorrow.