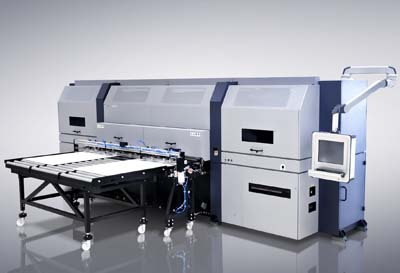 “The introduction of the 1012 and 1030 is a natural result of what we’ve been hearing from the production printing segment,” stated Christopher Howard, Senior VP of Sales & Marketing for Durst U.S.  “By adding the capabilities of our two new printers, along with the automation solutions, we make this a very strong solution for many of our print partners.”

At ISA, Durst also introduced its new 10-picoliter Variodrop printing technology featuring what the company refers to as multi-pulsing.

Durst explains the Variodrop’s multi-pulsing technology is based on delivering two voltage pulses, with the second pulse pumping precise amounts of ink into the droplet before it detaches from the nozzle plate – without forming any satellites. Conventional greyscale relies heavily on the accuracy of drop placement, according to Durst, which can be affected by the uniformity of drop velocity and variations in print-head conditions can lead to a mismatch of greyscale drop velocities.

“Compared to the often uneven droplets that are formed from a not-well-tuned greyscale wave form, this double-pulse drop shape we produce is perfectly uniform and the placement is always evenly spaced with Variodrop,” stated Dr. Richard Piock, CEO of Durst Phototechnik AG.

Durst is demonstrating its Variodrop printing technology on a Rho P10 320R UV system at the Las Vegas Sign Expo event, which continues until April 6. The company is also teaming up with Zund America and Caldera to demonstrate a complete production workflow – from ripping to printing to cutting.