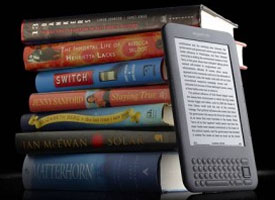 In July last year, Amazon.com CEO Jeff Bezos announced that sales of Kindle ebooks has exceeded that of hardcover books sold on Amazon. Now Amazon has announced that the number has now grown to exceed that of the paperbacks it sells.

In the company’s fourth-quarter sales report, the company revealed that for every 100 paperbacks it has sold, it has sold 115 Kindle books, with free Kindle books excluded from the number. The company also says that sales of its third generation device has exceeded the sales of Harry Potter and the Deathly Hallows, which Amazon claims to have held the title as the company’s bestselling product in its history.

“Thanks to our customers, we achieved two big milestones,” said Bezos. “We had our first $10 billion quarter, and after selling millions of third-generation Kindles with the new Pearl e-ink display during the quarter, Kindle books have now overtaken paperback books as the most popular format on Amazon.com.”