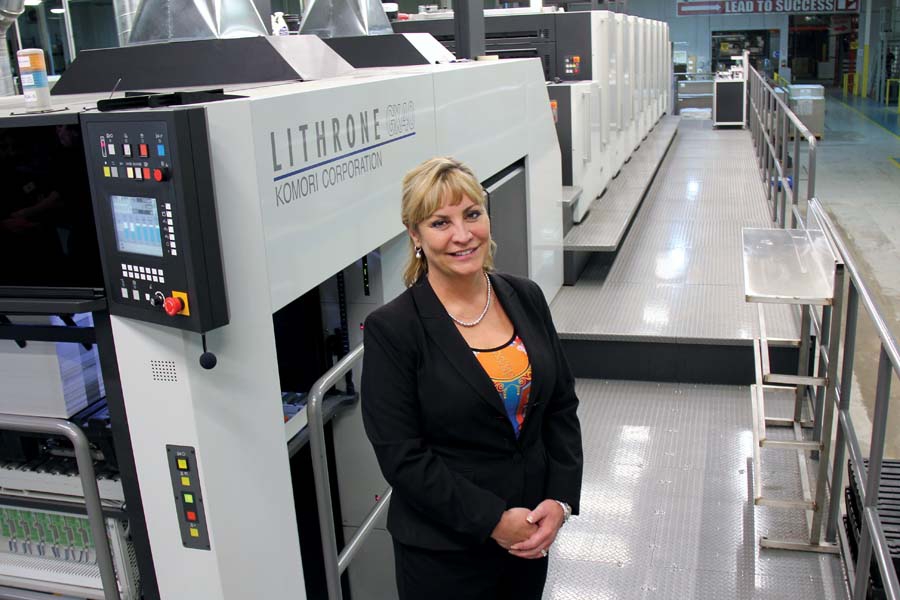 The following feature article was originally published in December 2015.

The Ellis Group, one of Canada’s most powerful independent packaging companies for more than three decades, has spent the past two years reinvesting approximately $8 million in its production platform. The family-run company, which operates three large facilities in the Ontario cities of Pickering, Mississauga and Guelph, is intent on increasing its throughput for the modern demands of the market, while maintaining its unique blend of quality and service.

The Ellis Group collectively produces more than 500-million cartons per year with some 200 employees across its three plants. The company’s largest facility in Pickering, Ont., Ellis Packaging Ltd., contributes around 280 million cartons per year. Two months ago, the reinvestment plan culminated with the installation of a new 40-inch, 8-colour Komori GLX press in Pickering, with both conventional UV and HUV capabilities, and a raft of automation features like automatic non-stop feed and delivery (with an integrated conveyor system), Komori PQA-S and PDC-SX systems for colour control and inline inspection, and an industry unique 36-inch raise. It is the first such press installed in North America.

The Pickering operation works with many Blue Chip companies and is the most diverse of the three Ellis plants, producing everything from automotive and cosmetics work to nutraceutical and pharmaceutical packaging. The Mississauga plant, Ellis Paper Box, while also becoming more diverse, primarily produces Over The Counter (OTC) pharmaceutical packaging. This facility installed a new 8-colour, 40-inch Komori GL UV press with coater at the end of 2014. The Guelph plant, Ellis Packaging West, installed a 6-colour Komori about three years ago to continue its focus on confectionary and grocery business.

The Komori in Guelph is not accounted for in the $8 million investment, which, over the past two years does, however, also include a 40-inch Brausse foil stamper and an inline cold foil system (Mississauga), as well as an Italworks carton-edging machine, tray former, die cutter and an automatic Bobst Carton Pack II added to one of the company’s gluers. The automation and consistency provided by the new equipment is now allowing Ellis to produce more cartons annually with the same number, or slightly fewer, employees. Generating around 30 percent of its revenue from the United States, the Canadian company is also proving its position as one of North America’s premium quality folding-carton producers, in an era when packaging has become one of the most-demanding print sectors.

Press power
“The market has changed a lot in the last year even. We have had a lot of mergers and acquisitions in the marketplace,” says Cathie Ellis, President of Ellis Packaging in Pickering. “We have become one of the largest in Canada as an independent folding-carton manufacturer, family owned, so that definitely separates us from other companies that now are owned and vertically integrated with mills. It has put us in a unique position as we are able to service and be proactive with our customers.”

Ellis explains the company remains very flexible in its ability to produce printing runs anywhere from a couple of thousand to a few million cartons, which is one of the key reasons why the group invested in 40-inch presses instead of very large format machines that have been making headway in the packaging world. The new 40-inch presses provide run-length range by reaching speeds of up to 18,000 sheets per hour, which Ellis was hitting just weeks into production, and also allow the company to invest in other key pieces of equipment for value-add work like simultaneous matte and gloss coatings, cold foil and holography. “The [vertically integrated] convertors are all about feeding the mill and, at the end of the day, we are in it to make the best folding carton that we can.”

Investing in the supped-up Komori presses, however, is largely about gaining throughput and speed-to-market to keep up with the rest of the packaging producers. “The industry itself is highly competitive and over the past three or four years there has been so much margin erosion,” says Don Smart, Plant Manager at Ellis’ Pickering plant, who joined the company six years ago. “We were looking for substantial game-changing increases in productivity. And we will get it through run speed on the equipment, through shorter set-up or make-ready times.”

The new 8-colour GLX press in Pickering replaced an older-generation 6-colour Man Roland machine (a second 7-colour Man Roland remains on the floor) that ran at speeds of up to 15,000 sheets per hour and required Ellis to work with offline inspection. With the PQA-S Print Quality Assessment system on the GLX, Ellis becomes one of the only packaging printers in Canada operating a true inline inspection system, even though it is a popular automation feature in Europe.

“It is not that we are just getting tight [with tolerances], it’s that we are checking more sheets, because the camera consistently looks, whereas before we were at the mercy of the operator pulling out a sheet,” says Yvan Roy, Pre-Press & Litho Manager at Ellis Packaging Ltd., who has been with the company for 16 years and oversaw much of its new Komori installation with press distributor KOMCAN.

In addition to providing more consistent quality for Ellis, the PQA-S  system in Pickering holds the potential for massive reductions in waste, which can be a profit killer in packaging. “Our board that we print is by far the largest component of the cost that goes into a carton,” says Smart, noting it can be substantially higher than the 40 percent paper cost of a typical commercial-print job, particularly when running smaller cartons that might be 12-up on a sheet. “We feel quite confident about being able to reduce our waste by at least 50 percent.”

The new Komori allows Ellis to work with the press maker’s recently introduced K-Station software, which provides computer-driven presetting and scheduling of presswork. Roy also points to the 36-inch raise on the GLX installation. “With 24-point or even 32-point board, you are not getting that many sheets on a skid,” he says. “It is not like 100-pound paper where you have 6,000 sheets and your pile is only 50-inches high.” The amount of material skids, Roy explains, can wreck havoc on the floor of a busy packaging plant.

To leverage the 36-inch raise, which was chosen over an elevator approach, Ellis integrated a unique automatic continuous feed process, removing the need for an operator to meld two skids by inserting and pulling swords – a task that can sometimes trip a press. “Now the press does it by itself, so basically all of the swords come out and they retract under the feed-board so you are taking the human error out – the more continuous you can run a press the more consistent it will be.”

Application power
Cathie Ellis also relates consistency to the company’s service and quality over the years, even as the packaging market is shifting so dramatically with mill-integrated print producers and the growing interest among commercial printers trying to leverage the might of modern presses to win more packaging work.

“It is one thing to print a box, but then you have all of the finishing that goes along with it and that is where commercial printers struggle,” says Ellis. “We also have expertise in structural design. Commercial printers do not have the structural background in order to understand the different nuances of a folding carton.” She explains a poor carton structure, for example, can jam up the customer’s production lines and create bigger issues, while die-cutting and gluing proficiency are packaging necessities. “It is typically the bottleneck in your business if you are gluing the work.”

Ellis Group’s expertise in structural design was on full display at the Paperboard Packaging Council’s (PPC) Leadership Conference in mid-October, where the company picked up two prominent awards, including Paperboard Package of the Year for its Toblerone One by One project and the Eco Award for Cadbury Créme Eggs 3 Pack. “We won two of the six most-esteemed awards, so that was quite an honour,” says Ellis, “and being a Canadian company, too, it was really exciting to wave our flag.”

The Toblerone project, according to PPC’s jury, represents a radical departure from Toblerone’s previous designs, with arresting structures and angular planes that are right-sized to eliminate wasteful false bottoms or void fillers, and they are also optimized for efficient pallet configuration: “They do everything a carton should – drive sales and breathe new life into brands by way of innovative structures and exquisite graphics while providing supply chain efficiencies and waste reductions.” The Cadbury Créme Eggs project, meanwhile, substitutes vacuum-formed plastic trays and plastic shrink sleeves with renewable, recyclable paperboard.

“Our customers know we always go the extra mile, which differentiates us from the larger companies that do not provide the same service. They cannot be as proactive or reactive as we are,” says Ellis. “I never shy away from anything and we will take on whatever challenges come along. We put a lot of money into this investment and we did it to be a formidable competitor.”