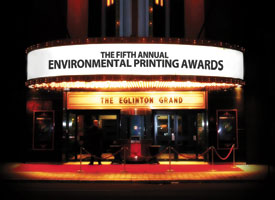 The Fifth Annual Environmental Printing Awards will be held this Thursday at the Eglinton Grand in Toronto. The event will feature a keynote speech by David Suzuki Foundation CEO Peter Robinson and will be hosted by CBC News anchor Diana Swain.

The Environmental Printing Awards was established in 2005 by PrintAction magazine to recognize the green efforts of printers and industry vendors in making the print production process a less environmentally impactful one. Since its inception, it has grown to be the premier event of its kind and has featured some of the top names in Canadian printing and environmentalism.

This year’s awards will also feature the inaugural Best of Show Award, given to the most environmentally progressive printing
company in Canada across all categories over the past year.

The Eglinton Grand is located at 400 Eglinton Avenue West (just West of Avenue Road). There is public parking just west of the venue on Castleknock Ave.