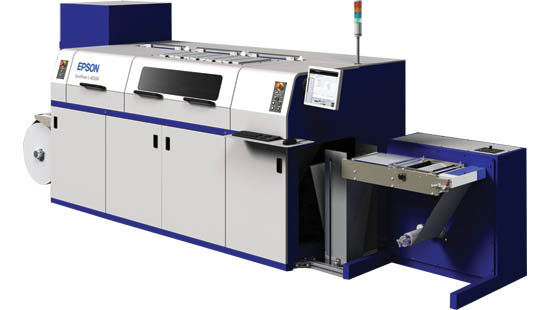 Epson sold its hundredth SurePress, engineered for primary label production, to Kanae Co. Ltd. of Nagano, Japan. The inkjet-based printing platform was first launched in October 2010 with the SurePress L-4033A.

In December 2012, Epson then launched the SurePress L-4033AW with white ink, using its Micro Piezo and soluble ink technology, which marked significant progress based on market needs to run white ink at high speeds. Epson states that as many as 20 percent of SurePress customers have purchased two or more units.

“We will launch a new model that includes a print-head using our cutting-edge PrecisionCore technology,” said Eisuke Shimoyama, General Manager responsible for sales and marketing of industrial solutions at Epson. “Going forward, our aim is to expand our market share and lead the digitalization of the printing industry.”

Epson introduced its PrecisionCore print-head technology in September 2013, during Labelexpo, in its new SureColor F2000 Series garment printer. At Labelexpo 2013, Epson also presented PrecisionCore within tech demonstrations of the SurePress L-6034V and L-6034VW presses (the latter including white ink), with a planned release date for summer 2014.

PrecisionCore print-heads are produced in a Micro-Electromechanical Systems (MEMS) industrial facility and will eventually be deployed across a range of sectors from industrial and commercial printing to office products.

“PrecisionCore represents a leap forward in printing performance,” said Minoru Usui, Epson’s global President at last year’s Labelexpo exhibition. “We continue to deliver outstanding quality thanks to superior dot control, and have introduced a new system to ensure reliability. At the same time, scalability allows us to fully leverage our historical strengths of ink flexibility and print-head durability.”

The SurePress L-6034VW includes six array lineheads which are comprised of 11 PrecisionCore print chip modules (totaling 52,800 nozzles) with multi-size dot control and high native resolution. The linehead is designed to work with Epson’s new low-energy LED-cured UV ink and in-line digital varnish technology, which can ultimately image at a 600 x 600-dpi resolution at up to 49.2 feet per minute. The press works with standard film and paper label substrates between 3.15 to 13-inches wide up to 0.013-inches (0.32 mm) thick. In addition, it enables printing onto heat-sensitive substrates like polyethylene.