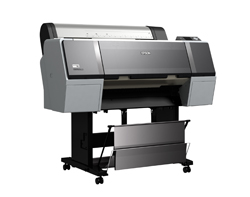 Epson Canada states it has introduced the world’s first aqueous-based, white-ink proofing technology for packaging designers and flexographic and gravure printers. The Stylus Pro WT7900, with a estimated price of $9,769, is designed specifically for proofing print work that requires the colour white, based on Epson’s new UltraChrome HDR White Ink.

The technology is said to provide a high white ink density and the ability for custom white colour toning, while being stable enough to proof on substrates like inkjet coated transparent and metallic films – up to 24 inches wide. While developing the technology, Epson North America focused on integrating the RIP and software of CGS, EFI, GMG, EskoArtwork and Kodak with its Stylus Pro WT7900 technology.

The Epson WT7900 was profiled at Unisource’s open house events in Toronto and Montreal last week. Unisource is an authorized dealer of Epson equipment.