Esko North America executives were in Toronto yesterday to celebrate what Ryerson University describes as a major technology gift, from Esko, for the school’s Graphic Communications Management program. 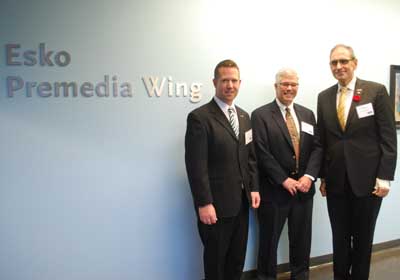 Sheldon Levy, President and Vice Chancellor of Ryerson University, was also on hand for the ribbon-cutting donation ceremony, which included naming a portion of Ryerson’s dedicated Graphic Communications Management (GCM) building as the Esko Premedia Wing. The Esko donation itself includes a range of hardware and software, such as packaging workflow tools for design, visualization, proofing and production, as well as a CDI flexo plate imaging system.

“Esko is very active in the Toronto packaging market and it’s seldom that we have a customer or client who isn’t connected to Ryerson University in some way,” stated Larry Moore, Esko’s Director of Software Services in North America. “Considering this, and the fact that Ryerson’s School of Graphic Communications Management is a leader in educating those in the packaging industry, donating this gift to Ryerson was a natural choice for us.”

The Esko technology is to be used by GCM students within related program courses, as well as by faculty engaged in packaging research projects. Ryerson states such research, while not yet determined, could involve areas like flexo plate quality, package design, and the printability of stochastic and other specialty dot shape data.

Headquartered in Gent, Belgium, Esko is widely regarded as one of the world’s most-powerful technology companies focused on packaging applications, while also developing products for sign and display finishing, commercial printing and professional publishing. 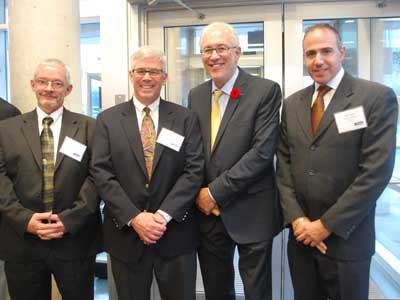 “Students in [GCM] will benefit tremendously from this strengthening of our partnership with Esko,” stated Ian Baitz, Chair of the School of Graphic Communications Management. “This major donation will allow our 500 GCM students to learn Esko’s industry-leading packaging design and prepress systems. We are thrilled to begin using Esko job management and automation modules, including tools such as DeskPack and ArtiosCAD. Our new Esko CDI Spark imagesetter will become a very important piece of equipment in our new prepress flexography workflow.”

A portion of the donation is earmarked for GCM’s premedia platemaking lab for flexographic platemaking. The Esko CDI Spark flexo has been installed to make plates for flexography, which will help students to learn and practice platemaking processes using the Esko workflow system. All third-year GCM students will produce flexo plates on the new CDI.

“We have focused on offset and digital printing for many years,” stated Baitz. “We added a flexo press three years ago, but our missing pieces were a packaging workflow and method to create plates. Cooperating companies in the Toronto area were kind enough to make plates for us, but we wanted students to see the workflow and platemaking process for themselves. Now we have access to the tools and students can evaluate their own plates for quality.”

Ryerson also intends to employ Esko-donated technologies within GCM’s robust extracurricular clubs, including the RyePack initiative. RyeTAGA, an official student chapter of the TAGA organization, with over 60 members, will also use the new Esko equipment for research papers and the production of its annual TAGA student journal. The annual production of RyeTAGA’s student journal has historically resulted in numerous awards for Canadian printing students when matched against others from around the world.

“Our students are very open to packaging and flexo printing,” stated Bates. “It speaks to our students. They are touching packaging every day. Packaging involves marketing, branding, and consumer decision-making processes. It is a challenging, evolving technology and the tools they use are on the cutting edge. We are grateful to Esko for its contribution and support, and hope that this program is a positive influence for our students, Esko, and the local industry base in the Toronto areas, as well.”