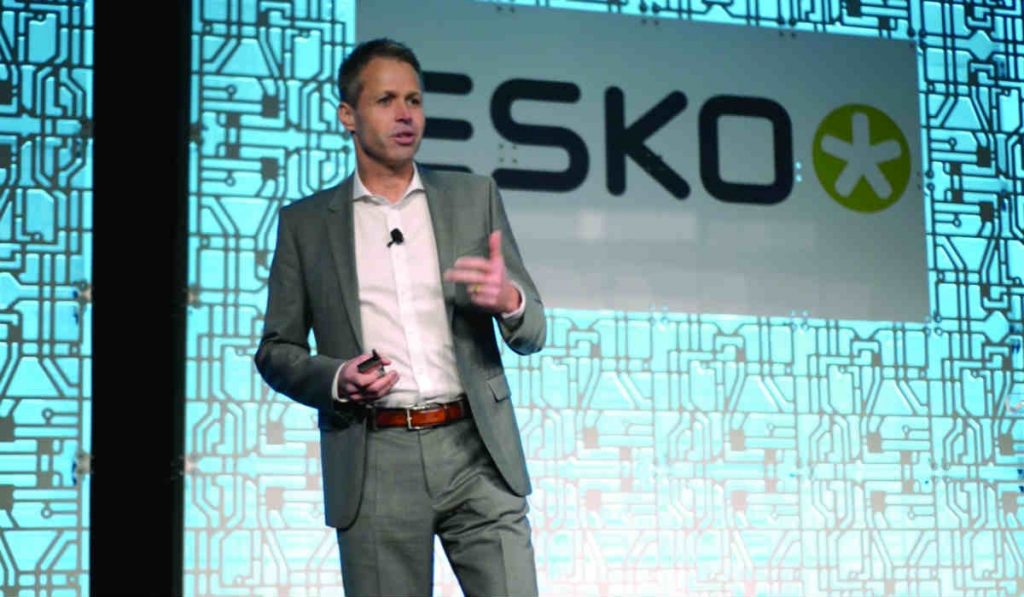 Udo Panenka, CEO of Esko, welcomes more than 500 attendees at EskoWorld in May 2017.

A technology update from the floor of EskoWorld, hosted by one of the world’s most powerful suppliers in the packaging world

EskoWorld is Esko’s annual user conference and was most recenlty held in the NASCAR hometown of Charlotte, North Carolina, from May 9 to 11, 2017. Esko executives, product managers, and support engineers mingled with more than 500 technology users from across the United States and Canada.

Flexo plate making is core to Esko with the CDI plate makers and Kongsberg cutting tables. One of the main areas of interest amongst Canadian attendees (apart from seeking warmer weather, which they got!) was updates in automation (WebCenter, Automation Engine).

Esko’s core workflow tool at the heart of their workflows is Automation Engine (AE), which is updated every alternate year at EskoWorld. In 2017 the new release is AE version 16.1.

Automation Engine gets new look Automation Engine is one of the most powerful “kitchen sinks” for label converters and flexo prepress, allowing everything from PDF processing to trapping and step and repeat operations.

New improvements to the UI are a simplified HTML5 browser interface code named “UX”. Another significant development is DeviceManager that connects AE to the CDI plate setter, the Kongsberg table and HP Indigo digital presses.

“We are seeking to integration AE with WebCenter for every task in our shop that an employee can do,” says Anthony Memme, Atlantic Packaging, Scarborough.

Enhanced packaging
Esko’s Studio Store Visualizer allows a user to walk through a store and pick up items. 3D design in product packaging is an area seeing new products and visualization tools. The store shelf is being replaced with Amazon purchases via an iPhone.

Designers and brand owners were offered tools including augmented reality virtual walkthrough of a department store where they could pick up and hold and rotate products to view the label. With compliance and regulatory requirements in a global product development life cycle of brand development, these tools are essential for brand owners and agencies.

Marriott Winchester, President, sgsco Americas, says, “We have a new digital store shelf and our large team here at EskoWorld is strongly involved in tools to create the enhanced pack shot and buyer experience.”

The new design is a flatbed device with a bank of UV LED sources that expose the back creating a plate floor, and another row on the top creating the plate exposure and raised relief.

In normal plate making, the back exposure is done separately and while operators are aware that the photoinitiated polymerization is affected by the time between the front and back exposure, this is rarely controlled.

In the new Crystal XPS series, the front and back exposure can be set to be simultaneous or with a minimum time lag. Photopolymer plates are laid flat on the table, and along with time improvements, the new imaging configuration creates greatly improved flat-top dots.

All brands of photopolymer plates are supported and in use in the 20 companies today. The CDI goes flat in the new Crystal XPS device, allowing simultaneous front and back exposure that creates cleaner, better shaped dots.

MediaBeacon helps in the publication of content for digital and physical channels and social media and integrated marketing.

Buckle up for NASCAR
A large number of Canadian packaging printers, designers and converters from Vancouver to Montreal, travelled to the United States for packed presentations and roadmaps from senior Esko executives.

On the social calendar, a closed private evening at the NASCAR Hall of Fame, allowed brave printers to practice being a pit stop crew. If you are into packaging, put next year’s users conference on your calendar. EskoWorld 2018 takes place in New Orleans, June 4 to 6, 2018.