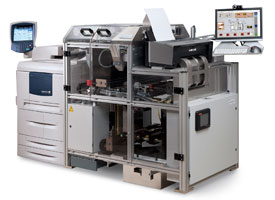 The machine is developed On Demand Books, started by Jason Epstein in 2003. Since then, the machine has gone through several revisions, culminating in the configuration today, which is roughly a 3 meter by 4.5 meter machine. The machine can print and bind a 300-page book in less than four minutes.

In September last year, the company signed a deal with deal with Xerox which sees its machines being paired with a Xerox 4112 printer. Xerox will also distribute the Espresso Book Machine.