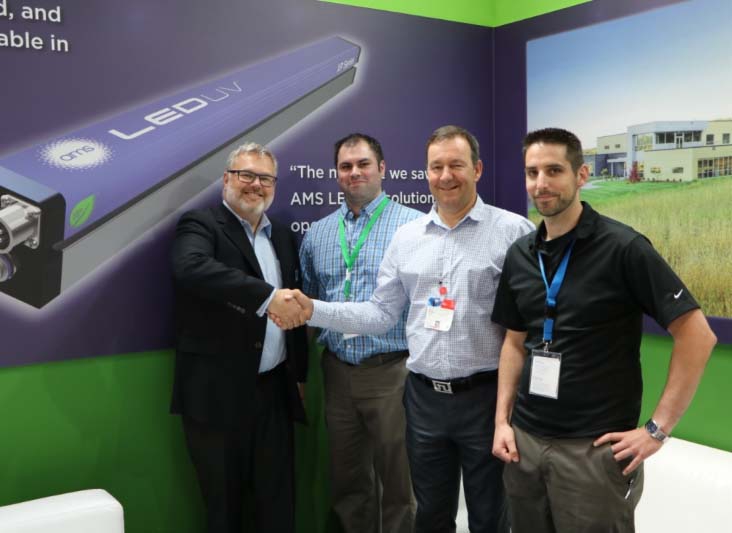 Etiquettes IML of Montreal, Quebec, is investing an LED UV system developed by Air Motion Systems to replace its existing UV technology on its roll-to-sheet press. The technology investment was overseen by Komcan Inc., which in mid-2015 became the exclusive distributor of Air Motion’s LED UV and UV curing technologies in Canada.

“AMS LED UV is a perfect fit for in-mould labeling,” said Donald Canon, Vice President of IML. “Our main goal is to reduce the heat that is involved in the printing of our thin polypropylene film. Currently we have to run with the minimum amount of intensity to keep heat low. Removing virtually all the heat from the curing process should enable our press speeds to increase over 50 percent.”

Canon continued to explain Etiquettes IML expects to reduce its curing energy consumption by 75 percent based on the AMS LED UV installation, which presents a significant opportunity for return on investment. The company will run LED-compatible inks from its existing supplier INX.

“With virtually no heat being emitted into the press or on the substrate, and the fact that curing at high intensities is achievable with a single [LED] module, AMS now has an entire new process to bring forward to in-mould labeling, which will change the face of this industry,” said Steve Metcalf, CEO of AMS. “We are very excited to work with IML as they pioneer this new process.”

Etiquettes IML has specialized in the production of in-mould labeling since 2006 when the company, which server the North American packaging market, responded to a growing demand for the printing process. With more than 60 employees, Etiquettes IML also operates a plant in Chicago, Illinois.