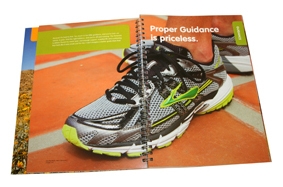 Pacific Bindery Services and Anstey Book Binding, have been recognized among the world’s best print finishers, as both Canadian companies win Product of Excellence Awards in the Binding Industries Association’s annual competition.

Vancouver-based Pacific Bindery Services took home two Product of Excellence (POE) Awards, which the Binding Industries Association (BIA) only hands out to entries that are technically flawless. The BIA claims the POE awards to be the world’s only competition specifically for graphic finishers and custom loose-leaf companies.

Pacific Bindery won its awards in the Adhesive Binding category, for a TED 2010 Conference program, as well as the Mechanical Binding category for its work on the Brooks Footwear Catalog Spring 2011.

Toronto-based Anstey Book Binding, a division of Specialties Graphic Finishers, won its POE in the Graphic Finisher Self Promotion category, for its piece called The Anstey Portfolio.