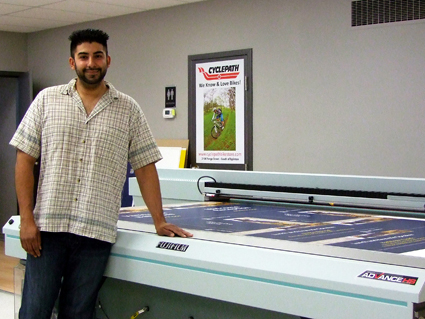 The large-format, inkjet-based Acuity Advance HS, purchased through Fujifilm Canada, is said to be 33 percent faster than previous models.

EZ Trade Signs was established in 2008 by General Manager Jamal Nazir, who has been involved in his family’s Etobicoke, Ontario-based business, Mr. Printer/Mr. Signs, for a number of years. “The white-ink option available in this model of Fujifilm’s Acuity provides us expanded versatility in our product offerings as well,” said Nazir.

Now with 16 employees, EZ Trade Signs operates as a division of Mr. Printer, which was founded back in 1978. Mr. Signs was founded 10 years ago. The large-format operation has a customer base primarily focused in the Greater Toronto Area and Southern Ontario, while also shipping work across the country from Nova Scotia and Alberta.