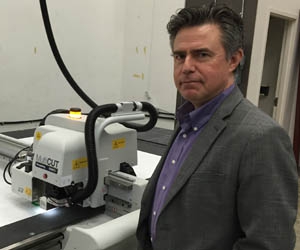 FASTSIGNS of Vancouver, one of the largest and longest-running franchises of the growing sign-making brand, added a new Esko Kongsberg V finishing table to its 5,400-square-foot production facility.

Paul LeBlanc, owner of FASTSIGNS of Vancouver, invested in his franchise, the second in Canada, in January 1996. At the time, the only other franchise in Canada was thousands of kilometres away in Newfoundland. LeBlanc moved from Nova Scotia to Vancouver and to start up his FASTSIGNS operation (originally 1,800 square feet) in a large city. LeBlanc moved into his current 5,400-square-foot facility in 2008 and now employs 10 people running two roll-fed printers, a flatbed printer, and a thermal transfer printer.

“We originally had a saw on our wall and a hand saw we used for cutting on production tables,” said LeBlanc. “A lot of the materials took a good amount of muscle to cut. On some occasions when clients needed a good number of retail signs and shapes, we sent them out to a subcontractor to be cut.”

Esko launched the Kongsberg V entry-level cutting table in May 2014. The system designed for sign-and-display work (a second machine focuses on packaging) is based on a MultiCUT tool head for cutting and routing. The MultiCUT has various insert options with an air-cooled milling spindle of up to 45,000 rpm, suitable for acrylics and other synthetics.