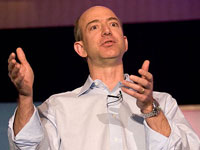 The Canadian government has given U.S. online retailer giant Amazon.com permission to set up a domestic distribution centre. In exchange, Amazon will actively promote Canadian content as well as invest over $20 million in the country.

Amazon has had access to the Canadian marketplace for over eight years through Amazon.ca, but shipping was always from the U.S. via a Canada Post subsidiary.

“For Canadians, this means jobs. It also means an investment of over
$20 million into the Canadian economy,” said Heritage Minister James Moore to the House of Commons. “What this means for Canadian authors is that they will
have more opportunity to sell their excellence to an international
audience. This is good for Canada.”

Funding has also been promised by Amazon to promote Canadian books both domestically and abroad.

Canada is currently the only country in which Amazon sells to, but does not have a local distribution centre. Ownership laws in Canada strictly limit foreign ownership of book publishing and distribution to Canadian firms and Canadian-controlled joint ventures. Amazon.com was previously repeatedly refused any physical Canadian presence, including a brick and mortar store and a telephone support centre. In 2002, Indigo Books & Music challenged Amazon.ca’s distribution agreement with Canada Post, claiming it circumvented Investment Canada laws. The case was dropped in 2004.