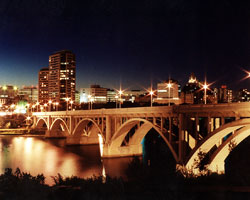 A joint study by the Financial Post and the Canadian Federation of Independent Business has ranked the most business-friendly cities in Canada. This year, the second year of the study, had Saskatoon take the top position.

The Canadian Federation of Independent Business ranks cities by “policy, which encompasses tax and regulatory policies; presence, which reflects the concentration of entrepreneurs and business startups; and perspective, which gauges the optimism and success of actual small business owners.”

Cities in Quebec also ranked favourably along with cities in Saskatchewan in the study while Toronto was dead last, at 96. Toronto suburbs fared better, leading the National Post to call Toronto the “bedroom community of the 905.” Markham ranked 33rd on the list.

High municipal taxes are a major factor determining the friendliness of cities. Toronto has a property tax rate for businsses roughly 4.5 times that of a comparable residential whereas Saskatoon’s rate is 1.75 times.