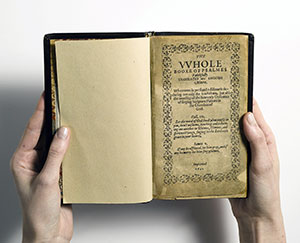 The Bay Psalm Book, proclaimed as the first book printed in North America, has just fetched a record $14.2 million at auction in New York this week. The book is not only known as a symbol of Puritanism, but also as an icon of the founding of America.

The book was purchased by American businessman and philanthropist David Rubenstein, who plans to share it with the American public by loaning it to libraries across the country, before putting it on long-term loan at one of them.

This copy of the Bay Psalm Book is one of 11 surviving copies and was produced in 1640 by British colonials in Cambridge, Massachusetts. Originally 1,700 copies were printed. The last copy that sold at auction was in 1947 for a sum of $151,000.

The auction price fell short of its $15-30 million expectations, nevertheless managed to best the previous record for the price paid for a book held by John James Audubon’s Birds of America, which sold in 2010 for $11.5 million.