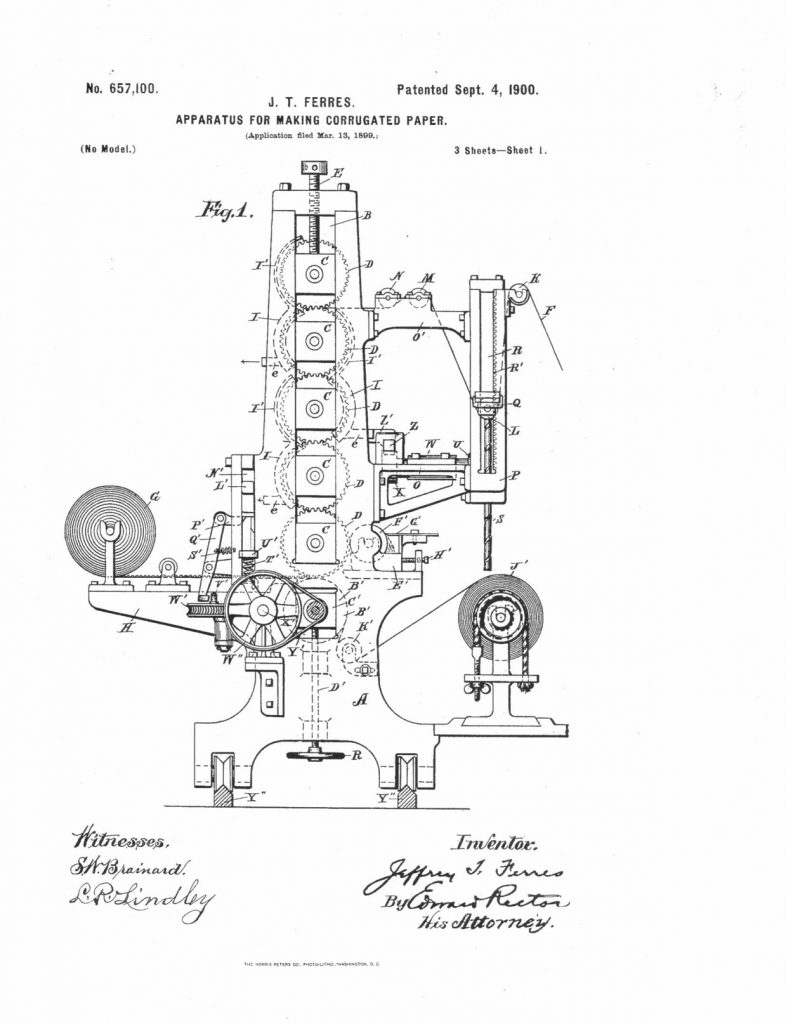 In the 20th century, the J.W. Sefton Manufacturing Company’s Chicago offices were buzzing with the arrival of a potential new customer: a glassware manufacturer from Oklahoma. The glass was shaped as a globe. It was popularly used for street gas lights at that time.

Sefton was in a fledgling sector of making the newly invented corrugated board from yellow straw, referred to as strawboard. The company had started manufacturing wooden butter dishes. However, this changed when Jeffrey T. Ferres, an employee, patented a new principle to an existing ‘corrugator,’ known as a pressure-roll single facer.

Unfortunately, the glass executives were not convinced a rigid and pleated strawboard box would be better than their current wood box filled with excelsior (shredded wood).

Wood packing was the only option until then. It was expensive. Further, fragile items like glass globes often broke during transit.

The novel idea of a corrugated box had the added benefit of reduced weight, but it was unproven in the days when everything had to travel by train. Despite Sefton’s sales team citing how glass products were already being shipped to as far off as California, the glass executives weren’t biting; they needed a better sales pitch.

Therefore, Sefton’s design team got to work and designed a square carton with die-cut sunburst trays at both ends. The globe was now firmly suspended without touching the sides of the box. Now, for the demonstration. A dozen glass globes were packed in these newly designed cartons, taped shut, and brought to the top floor of Sefton’s Chicago building. In a stairwell, each box was booted down the stairs, floor after floor, until they arrived in the basement looking battered. When the cartons were opened, the glassmaker was surprised, as none of the globes were broken. This moment in time would be instrumental in bringing the corrugated carton out of the dark shadows of irrelevance and mistrust.

Jeffrey Ferres improved the single-face corrugator, which was designed in 1895 by Philadelphians Charles Langston and David Weber. He added a liner to the open corrugated flutes. This would soon develop a double-facer, opening up corrugated materials to the modern age.

There were many more hurdles to overcome since printing on paper cartons proved difficult. Hooper presses were the only way to print, and these machines were designed for wood boxes, not corrugated. They were unforgiving. Since they embossed deeply—and ideal for wood —corrugated materials were crushed by the press. Modifications and new printers soon solved the problems, but with type only being applied.

The introduction of aniline (flexo) ushered in an era of improved graphics along with rapid ink drying. Even today flexo is widely used for printing directly on corrugated double-face cartons. A pizza box is a popular example of flexo in action.

As the wood packing industry slowly fell out of favour, corrugated took another giant leap with litho-printed paper laminated to flat boxes. By the mid-20th century clerks and salespeople started disappearing from stores. This meant that the products on the shelves had to become the salesperson while safely holding the contents. Today we are witnessing the same transformation of retail job losses; the only difference is that the catalyst now is IT.

Corrugated straw paper was initially patented in England by Edward Healey and Edward Allen in 1856. However, the patent was not for making a box, but for creating flutes without liners to protect delicate glassware inside a wood box. Their invention was a by-product of the laundry industry where young women hand-fed the edges of window curtains or collars of shirts and blouses. Today corrugated materials are widespread with the recent addition of micro-flutes, specifically F- and N-flutes, which can be easily printed while offering rigidity and protection for everything from cosmetics to foodstuffs. In the 1970s, Planeta promoted the ability of their Variant offset press to print on F-flute since the variant could handle over 50 point materials.

The genesis of modern corrugated production began at J. W. Sefton’s factories in Chicago and Anderson Indiana. In 1930, Sefton was purchased by Container Corporation of America. Today, the remnants of J.W. Sefton are held by RockTenn that merged with MeadWestvaco in 2015 to form WestRock, the world’s second-largest rigid and corrugated packaging manufacturer after International Paper.

According to Dublin-based Research and Markets, corrugated board sales are growing fast. In 2019, the sales were worth USD262.61 billion. It is expected to grow to USD339.95 billion in 2025.

Eighty-eight per cent of new corrugated includes recycled materials, a big win for environmentalists. This stat is also attractive to consumers who want companies to adopt eco-friendly practices.

Easily recycled corrugated has indeed changed the way we buy goods. From frugal beginnings to today’s modern, strong and lightweight box, there is no stopping our love affair with fluted cartons: a win-win not only for the environment, but also commerce. Perhaps we can say WestRock is the father of the modern corrugated shipping carton business.

This article originally appeared in the November 2021 issue of PrintAction.