Fujifilm has unveiled its newest wide-format printer, called the Acuity LED 1600, with both roll-to-roll and flatbed production. The 8-colour Acuity LED 1600 is built around a LED light source for curing UV-LED inkjet inks. 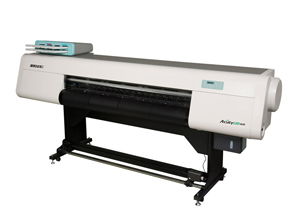 Fujifilm describes the device, based on its LED curing, as capable of handling a range of substrates, including PET, acrylic, and polycarbonate materials.  Based on its 8-colour configuration (cyan, magenta, yellow, black, light cyan, light magenta, white and clear), the Acuity LED 1600 can print both colour and clear inks in a single pass, which allows for high-gloss applications.

Fujifilm will highlight the Acuity LED 1600 later this month at the Chicago-based Graph Expo 2011 trade show.