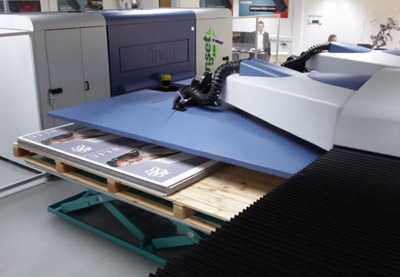 Fujifilm officially opens its new inkjet ink manufacturing facility located at its plant in Broadstairs, United Kingdom. All of Fujifilm’s inkjet ink supplies sold in the Canadian market come from this facility.

During a press tour for the event, Fujifilm also discussed its soon-to-be-released corrugated media handling system for the Inca Onset press, for which the company is the exclusive global distributor.

The new ink facility has been in the works for two years with an investment of over €4 million, as well as an additional €2.5 million invested to upgrade the R&D department. Over this period, Fujifilm has re-engineered the plant under its Specialty Ink Systems group to focus on the company’s growing wide-format interests.

Over 340 employees work at the Fujifilm Broadstairs site and today more than 80 percent of them are involved in inkjet ink R&D and manufacturing. With a footprint of 1,800 m2, the new site is built to accommodate a projected annual increase of 56 percent in the production of UV ink, manufactured in a range of batch sizes of up to 4,000 litres. The facility has the capacity to manufacture 6,000 tonnes of ink per year.

“We have planned everything meticulously over the last few years, recognizing that to stay at the forefront of digital ink technology with our range of Uvijet inks, we need to work with state-of-the-art equipment and have the ability to increase production and packing volumes,” stated Colin Boughton, Operations Director for the plant.

In 2011, the Specialty Ink Systems’ Broadstairs site received the Best Process Plant Award from a program, called the Best Factory Awards, organized since 1992 by Works Management and Cranfield School of Management.

“We are pleased that the transition from one manufacturing area to another was completely seamless, with absolutely no disruption to our production output at all,” stated Boughton. He points to how the Broadstairs group worked closely with a specialist company to develop next generation dispersion equipment for its inks to reduce particle sizes to less than 100nm – “True nanotechnology.”

Boughton explained that Fujifilm is to continue making further investments in equipment for the plant throughout 2013. The Fujifilm Speciality Ink Systems plant has been accredited to the Environmental standard ISO14001, in addition to the Quality standard ISO9001. Accreditation to the Health and Safety Standard OHSAS 18001 is to be complete by mid 2013.