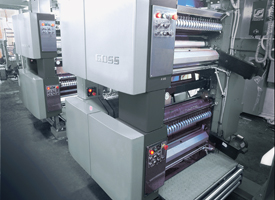 Glacier Media, which primarily generates revenues in various publishing sectors, aims to complete the Goss Community SSC installation by the end of this year’s summer, when it is scheduled to start printing The Globe and Mail newspaper in the two prairie provinces.

“Working with Impressions Worldwide as an intermediary is somewhat unique, but their understanding of the specific requirements of the publisher as well as their knowledge of the Goss Community SSC towers has helped to synchronize the project,” stated Merton Howard, Goss International Sales Manager.

First introduced by Goss in 1962, the Community SSC is a single-width, one-plate-around web offset press for printing newspapers and semi-commercial products. Goss has sold over 38,000 units worldwide, as the features and the base design of the press have evolved.

Glacier Media is involved in printing activities primarily through its Business Information Group, which holds 43 trade magazines, 28 directories and 35 Websites.