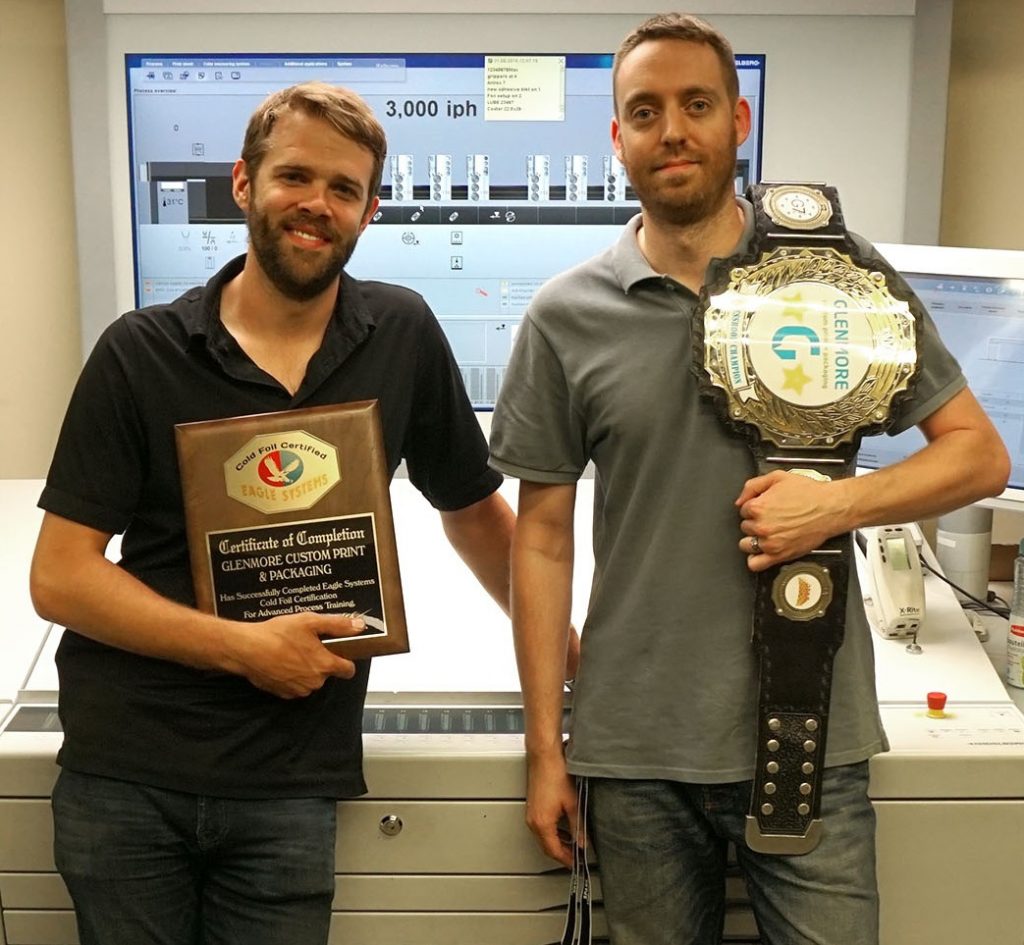 Glenmore Custom Print + Packaging of Richmond, BC, has successfully completed its Eagle Cold Foil Certification Course (ECFC). The 8-hour program is not only geared toward improving production understanding and techniques of press operators, but, as Eagle Systems explains, the certification program incorporates the executive management level to focus on Return On Investment, as well as quality production.

“We first installed our Eagle Cold Foil systems in June 2015 and it’s lived up to every promise made by Eagle President Mike King,” said Stefan Congram, Operations Manager, Glenmore. “We’ve learned to not only respect Mike but trust him. When he suggested the class for our operation we knew we’d reap significant benefits.”

Eagle conducted the Eagle Cold Foil Certification Course (ECFC) at Glemore’s Richmond facility in mid-July, 2016, to address real-world production factors and influences. Eagle has designed a unique test form, designed for failure, to run off each applicant’s system. Eagle explains the press is then finite-tweaked to maximize performance out of each operation’s adhesives, foils and blankets. This in-house certification approach allows for the elimination of former process obstacles, such as pin-holing and mud cracking.

“It’s an understatement to say it’s thorough, but more importantly it’s effective,” said Congram, a 15-year veteran of the commercial printing industry, who has spent his the last eight year with Glenmore. “The press staffers now have an in-depth working knowledge and understanding of the cold foil process. Not just the what’s, as in what to do, but the why’s and how’s. Our people are now as dialed in as our system is. We are reaping the rewards every single shift with faster make-readies and noticeable quality jumps.”

Founded by Glenn Rowley in 1981, Glenmore Custom Print + Packaging has evolved from a one-person shop to a significant Canadian printing operation of more than 90 employees in just under 35 years. The company provides a range of services like conventional, UV, offset, digital and wide-format printing, as well as pre- and post-press capabilities. The family-owned and operated company has advanced into a second-generation phase under the managerial leadership of the founder’s son James Rowley.