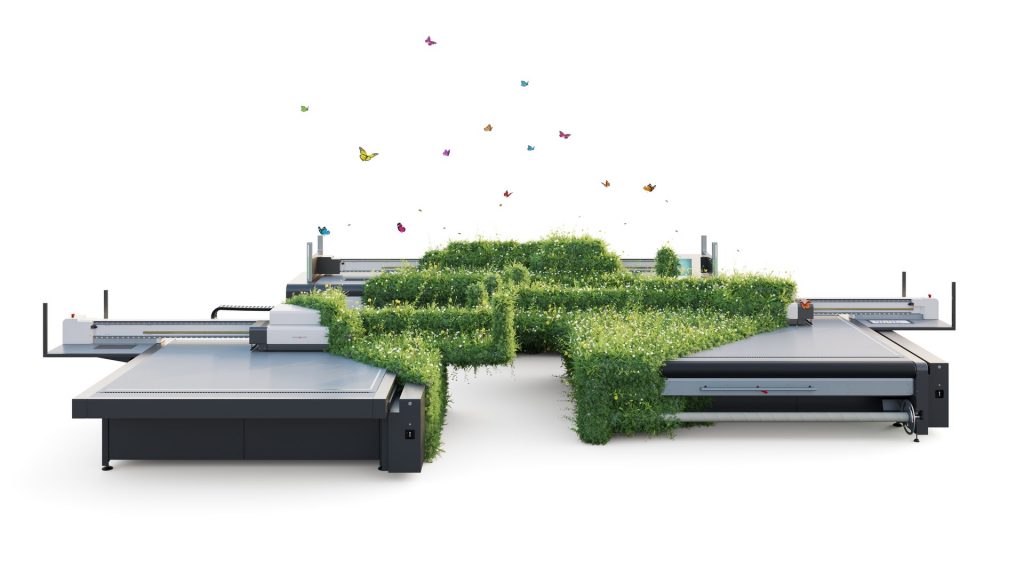 Using sustainable printing systems is a choice that pays dividends in many different ways. Photo © SwissQprint

Purchasers of large-format printing (LFP) systems focus mainly on aspects such as productivity, possible applications or investment and profitability levels. However, sustainability is gaining ground as a criterion – not only due to corporate values, but also because it is increasingly seen as a social and political requirement. The good news: anyone who makes careful use of resources will also save money.

Here are five approaches and concepts based on sustainability that can be applied when assessing a large-format printer.

Avoid pollutants
The ink and curing system determines whether more or less emissions occur. When selecting the inks, it pays to avoid solvent-based systems. This eliminates the need for ventilation systems that entail additional investment and operating costs. Emissions can be kept to defined limits by using low-pollutant or certified inks, such as Greenguard. In return, this opens up a wide range of applications because the print products can also be used in sensitive environments.

Systems with LED lamps offer more advantages for UV printing than mercury vapour lamps, which have to be disposed of as hazardous waste because of their composition. They also have shorter service lives than LED lamps, so operating costs are higher.

Use energy efficiently
Large-format printers are operated with electricity, and electricity should be used as efficiently as possible. ISO 20690:2018 sets standards here. The energy balance of systems that use heat for curing is relatively poor. The example of UV printing shows that LED systems also perform very well here as their power demand is low and they give off almost no heat. Room air-conditioning and heat-sensitive media are the keywords. Another factor is that – unlike mercury vapour lamps – LED lamps do not have a warm-up phase and they are only switched on when they are used for curing.

As well as drive systems, computers and monitors, significant power consumers also include vacuum pumps. They are used to hold the media down securely in flatbed and hybrid printing. Their consumption is high when they are running continuously at high speed. Underpressure-controlled vacuum systems reduce their speed as soon as the required underpressure has been reached. As well as saving energy, this feature minimizes noise pollution.

Use machines with long service lives
Manufacturing a printer leaves an ecological footprint behind due to the materials built into the machine and the energy used for transport and production. All these activities generate emissions. The longer the machine is operated, the more this impact will be offset. The same applies to investment costs.

Opt for low-maintenance equipment
CO2 emissions are also influenced by the frequency of service calls and consumable parts that need replacing. Reliable, low-maintenance machines keep emissions down because travel, transport and the consumption of resources are minimized. This has a side effect in terms of business management as users can plan and calculate downtimes and costs.

Claim subsidies
The examples given above show that a sustainable strategy boosts profitability. Moreover, many governments now subsidize environment-friendly solutions. Germany, for example, offers support for energy-efficient printing systems at Federal State level. The process may involve some effort on research and paperwork, but it will bring a fair amount of the investment costs rolling back into the coffers.

When purchasing a new large-format printer, it therefore pays to give consideration to the sustainability aspect – at multiple levels. Last but not least, an active contribution to environmental protection is also an image factor that can then be marketed.