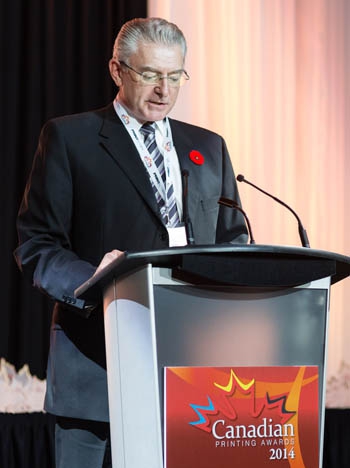 Don Gain recieves the Printing Community Leader of the Year Award at the 2014 Canadian Printing Awards.

Harmony Printing Limited of Toronto, Ont., entered receivership last Friday and is in the process of shutting down its facility over the next few weeks. Several of Harmony Printing’s employees are joining Mi5 Print & Communications based in Mississauga, Ont.

Don Gain, President and owner of Harmony Printing, plans to retire after the company winds down. “I have always held the philosophy, that when things do not go the way you want, the first place you look is in the mirror,” says Gain. “The buck stops at my desk and if things do not happen it is my responsibility, regardless of who else has participated, even if it is always a shared responsibility.”

Gain explains while Harmony has held on to the majority of its clients, including several Blue Chip companies, it has proved difficult to add to Harmony’s customer base over the past few years. “It is a brutally tough market. The pricing that is out there is incomprehensible,” he says. “Like so many companies in this business, we have more capacity than we have work. We have trimmed the operation as tight as we can and we just haven’t been able to hit the top line.”

Gain has been one of the most influential leaders in the Canadian printing industry for more than two decades, working closely with several associations and organizations to help direct the industry’s future. This includes his 11-year role as Chair of the Canadian Printing Industries Scholarship Trust Fund, which in September 2015 awarded 35 students $56,000 in scholarships to pursue post-secondary education relating to the printing industry.

Gain was also instrumental in helping to establish Ryerson’s University’s dedicated building for the School of Graphic Communications Management, which this year had 602 full-time students, including more than 180 admitted into the first year of study, making it North America’s largest such program focused on the printing industry. In 2014, PrintAction magazine named Gain as its Printing Community Leader of the Year.

“It is a wonderful industry. It has so many good people in it,” says Gain, who purchased Harmony Printing in 1988, following a short hiatus from printing where he began his career in the 1970s at the transformative typesetting firm Howarth and Smith. “I realized that I missed the caliber of people in this industry, which is why I came back and sought out an acquisition… I have such high regard for the people in this industry, in every aspect of the community. It is a special industry.”

Before officially retiring, Gain plans to help Harmony’s staff make as smooth a transition as possible during the facility’s closure. “My staff has been exceptionally gracious,” he says. “They are just a wonderful group of people,” he says. “It has been an emotional roller coaster and extremely difficult to get to this point.”