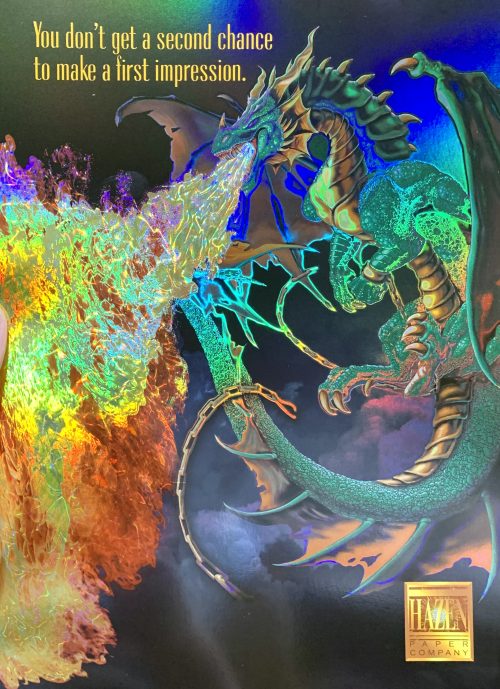 The front of the promotion features a fire-breathing dragon with glittering scales. In order to create a blast of moving flames, Hazen used registered, custom colour-motion and multi-channel holography. The back of the promotion features a random repeat custom holograph, “random burst,” which creates a moving, three-dimensional flash backdrop for a flock of butterflies.

Created at Hazen’s state-of-the-art holographic lab and manufactured at the company’s Holyoke facility, the promotion was created using Hazen Envirofoil, sub-micron transfer-metallized to use less than 1 per cent of the aluminum of traditional foil laminate and a recycled film carrier. The environmentally-friendly Envirofoil is repulpable as paper after de-inking. It was offset printed using UV-cure inks by AM Lithography.

According to Hazen, the most unique aspect of the promotion is that it is two-sided custom holography, transfer-metallized on both sides.

“It hasn’t been done before,” said John Hazen, company president. “The ability to transfer-metallize a lightweight stock on two sides with custom holography opens up the potential for use in many applications where consumer impact is key. It’s very exciting.”