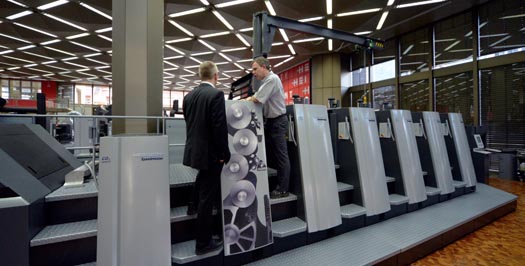 Heidelberg announced the Speedmaster XL 75 Anicolor is now commercially available in North America. The 29-inch format press went into series production in February 2013 at Heidelberg’s Wiesloch-Walldorf plant in Germany. The XL 75 Anicolor made its debut at drupa 2012.

Heidelberg describes the XL 75 Anicolor as holding a run-length crossover of 250 sheets, largely based on the short, zone-less Anicolor inking unit with dampening system, which also helps the press reach sellable quality in a few as 10 sheets. Anicolor inking relies on an engraved screen roller located between the ink chamber blade and the ink form roller.

The 23 x 29-inch XL 75 Anicolor is available in four- to 10-colour straight and perfecting configurations, handling stocks of up to 32 point, as well as with inline and double coating. The press can be used for producing CMYK process, extended gamut printing, as well as with PMS spot colours.