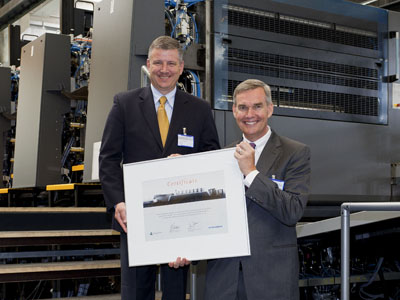 Steve Voorhees, CEO of RockTenn, and Craig Gunckel, Executive VP of Merchandising Display and Folding Carton, were on hand at Heidelberg’s Hall 11 assembly centre, part of the press maker’s Wiesloch-Walldorf factory in Germany, to inspect the 100th VLF press. The XL VLF platform, rated for running 18,000 sheets per, was launched in 2008.

“Relationships with a strategic industry leader and partner like RockTenn, representing world-class manufacturing practices at the highest level, help Heidelberg perform at its best,” stated Heidelberg Management Board Member Harald Weimer. “Getting to know the RockTenn team and working closely with their plants has definitely moved our VLF product line to peak performance status.”

RockTenn has 27,000 employees at locations in the United States, Canada, Mexico, Chile and Argentina.