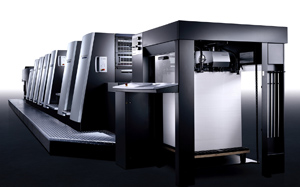 With the largest booth space at PRINT 09, beginning this weekend in Chicago, Heidelberg plans to debut its new KAMA ProCut 74 to the North American printing industry. This cutting machine is engineered for small to medium runs with applications like die cutting, creasing, kiss-cutting, cold embossing, hot-foil stamping, hologram stamping and hot cutting. The machine works with a maximum sheet size of 23.6 x 29.1 inches. Heideblerg is also making the North American debut of its Easygluer 100, which is an entry-level model gluer with a maximum speed of 300 meters per minute.

While at PRINT 09, Heidelberg will also highlight several of its more recent technologies to come out of drupa 2008 held in Germany. The company plans to show its Speedmaster XL 75 operating with InPress control, Autoplate simultaneous plate changing and Intellistart. Heidelberg’s Speedmaster SM 52 is to be shown with the Anicolor zoneless inking system in a 4-colour plus coater configuration. Also on display will be a 2-colour Printmaster QM 46, which has a 18.11 x 13.39-inch format.

To highlight its vision of software-driven automation, Heidelberg’s booth is to be centred around eight Prinect workstations that link to working presses and other equipment. Some of the newer Prinect modules include Integration Manager, for scheduling and monitoring workflow over multiple jobs, and Postpress Manager. From its workstation hub, paths will lead to four quadrants set up both as equipment areas and as theaters for the company’s various production processes on display.