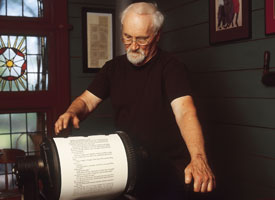 The British Columbia chapter of the Society of Graphic Designers (GDC) have partnered with Hemlock Printers Ltd. to establish the Jim Rimmer Community Scholarship for Design.

Jim Rimmer passed away last week at that age of 76. Over his 50-year career in design, book design and typography, Rimmer became one of Canada’s most important typographers and was revered within the local and international graphic arts industry.

The scholarship was actually announced in November 2009 at an annual GDC/BC event called Practivism, which Rimmer could not attend because of his battle with cancer.

“We are very proud to support the next generation of designers in our community, and feel it’s fitting to honour Jim Rimmer’s contributions to the field with this scholarship,” said Dick Kouwenhoven, President and CEO of Burnaby-based Hemlock Printers.

The Jim Rimmer Community Scholarship for Design will be awarded annually to two students “who demonstrate the use of design thinking to benefit their community, and have used print to effectively communicate a message, effect action, or promote change.”

Applications for the two $1,000 scholarships are due at the end of September and will be judged by representatives of Hemlock Printers and GDC/BC. Recipients will be announced each November at Practivism.

“Jim Rimmer is an icon of Canadian design, craftsmanship and ingenuity. This scholarship is a reminder to the new generation of design thinkers that we need to retain the principles of our craft,” said Marga Lopez, MGDC, President of GDC/BC.