Hemlock Printers Ltd. has been named as a North American Printer of the Year in Sappi Fine Paper’s 13th-annual printing competition, and will now compete against printers from around the world to become Sappi’s International Printer of the Year. 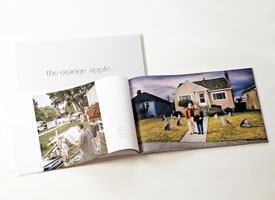 Based in Burnaby, British Columbia, Hemlock won in the category of Digital Printing for the production of “The Orange Apple.”

This October, all 10 Gold winners from North America, including Hemlock, will put their production work up against printers from Africa, Europe, Australia, and Central and South America, in the final stage of Sappi’s global competition.

The 10 North American Gold winners, as determined by a panel of four independent judges, receive $20,000 in design support from Sappi.

“The gold winners of Sappi’s North American Printers of the Year have not only demonstrated innovation and printing excellence at its finest but have also illustrated how print continues to be a vital and relevant medium to communicate to audiences today,” stated Jennifer Miller, Executive VP of Marketing and Communications, Sappi Fine Paper North America.