If we don’t learn from our mistakes, we are bound to repeat them 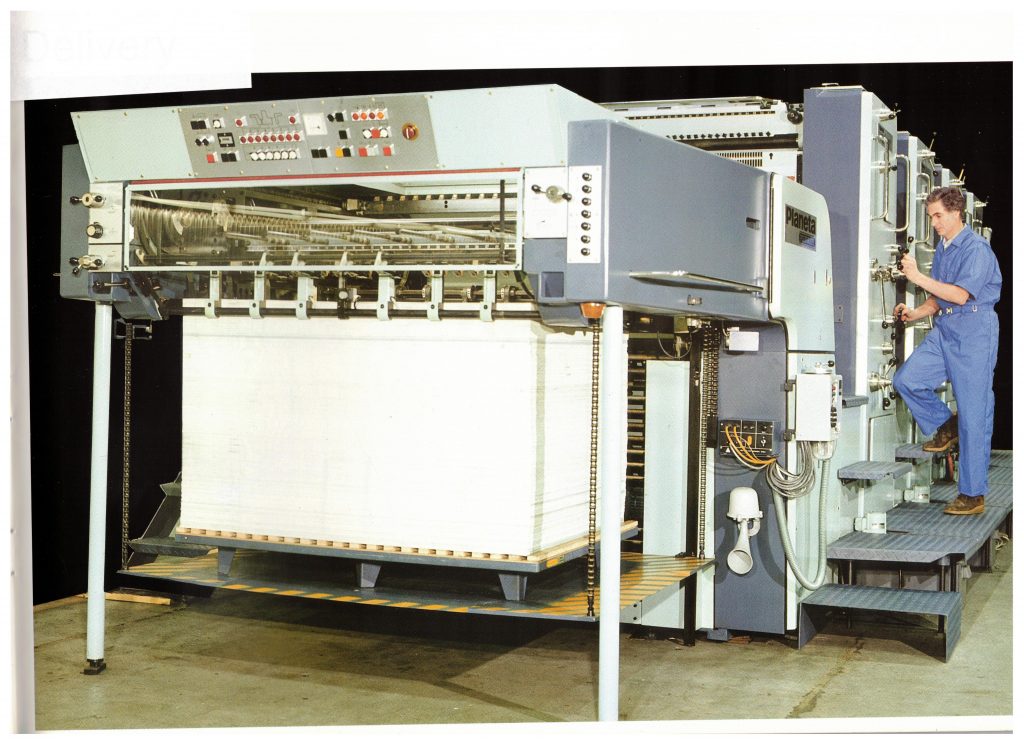 The Planeta Super-Variant press at the Planeta factory in Radebeul, Germany, in 1981.

Recent world events have exposed lessons learned over the last one hundred years — if we don’t learn from our mistakes, we are bound to repeat them.

If there is one thing any business owner can agree on, it would be that instability is bad for business. Our current global situation provides plenty of uncertainty. Politics offered by unstable leaders threaten many Western democracies, with a new form of nationalism spreading like it’s 1933 again.

In the United States, both Congress and President are at loggerheads over everything from immigration to trade. The United Kingdom struggles with Brexit. Hungary and Poland, even the Philippines, have turned sharply to the right. The near east is mired in bloodshed with over a million displaced people. We are in a very uncertain time where misleading rhetoric, particularly with trade, has hurt the Western consumer and supporting industries, including printing.

We recently celebrated the 30th anniversary of the fall of the Berlin Wall and with it, the Soviet Union and Eastern Bloc. Few ever thought we’d see the day when the whole of Europe would be rid of the menace conveniently referred to as communism. Except those countries were never really socialist at all, just state-controlled fascists that stunted the growth of a once progressive people.
The state owned everything, and the dictatorship of the proletariat mandated that society held power, except it wasn’t like that. The Soviets and their satellite economies were just state controlled, everyone had a job, there were no rights to speak of, and there was the secret police to keep the masses in line. All orders came from Moscow, and life was miserable. The ultimate source of this madness in Eastern Europe derived from the Third Reich.

The Planeta Variant press in Planeta’s Radebeul factory in 1972.

The Planeta Super-Variant press at the Planeta factory in Radebeul, Germany, in 1981.

A photo of the Karl Krause abandoned factory in Leipzig, Germany, taken by Nick Howard in 2018.

Neither socialism in its purest form or communism has ever worked, but there are plenty of examples of socialism working in western capitalist democracies, including the U.S. — medicare for one, old-age pensions for another. Our police and firefighters are part of this group too. In Canada and all of Western Europe, subsidized healthcare is a form of socialism. Governments cannot operate as if they are a business; they must oversee and set the rules, keep order, and supply a helping hand to those who require assistance. Democracies need a form of socialism, especially today.

Trade and commerce are the biggest elephants in the room at this moment. Getting this wrong has caused more chaos and wars than anything else. Even after a victor is anointed animosities percolate for decades after. In 1918, after the First World War, the Allies made Germany pay and pay they did. Besides financial reparations, chunks of Germany were lobbed off to settle years-old disputes with France. The impact on the German people was catastrophic and led to the rise of Adolf Hitler and his Nazi party in 1933. The Nazis seized on hyper-inflation and the weakness of the Weimar government then found scapegoats and went to work restoring Germanic pride lost in the war. The decisions made in the reparation agreement of 1919 would lead to another disastrous war in 1939.

World War Two was another bloodbath with millions of lives lost, and many industries ruined. For the printing industry, the worst was yet to come. The Soviet Union managed to get to Berlin before the Allies and overnight, the German state was hacked up with, as Winston Churchill would later describe, the Iron Curtain dividing more than half of Europe. Imagine for a moment what it would be like if your business, possibly handed down from generation to generation, was on the wrong side of that line and nationalized overnight. You wouldn’t own it anymore. This reality was precisely the fate that awaited a significant portion of Germany’s industry. The area around Leipzig was “ground zero” for the massive German printing industry, and its only luck was the Allies weren’t a day or two late; otherwise, Koenig & Bauer and M.A.N. would today be footnotes in history.

Companies that had been in business for decades simply vanished, as an example, Agfa’s plant in Leipzig was dismantled and shipped off to Russia, while the intellectual property transferred to the American firm G.A.F. as reparations (Agfa was then part of the infamous German chemical company IG Farben). The few remaining were reorganized into state collectives called Volkseigener Betrieb or V.E.B. Karl Krause was a substantial company encompassing over one hundred acres of land near Leipzig. The Biagosch family, decedents of the founder, were only an identity card border check away from not escaping to Bielefeld in the allied controlled west. Had this not happened, the printing industry would have never heard of Wohlenberg paper cutters. For it was the newly incorporated Krause that partnered with machine-tool maker Wohlenberg to start manufacturing Krause guillotines again. All was lost back in Leipzig, and the former Krause plant was taken over by the state.

Related businesses – Victoria Werk, Mansfeld, Druckma, Gutberlet, August Koebig, O. Hoppe & Co, Kohma, Vomag, Kama, Paul Glöckner and Gebrüder Brehmer – were rounded up and faced the future as V.E.B.s. Today almost all except Kama are just memories. Some more successful firms retained their names and would limp along under the weight of the D.D.R. Perfecta and Planeta brought in much needed hard currency. Planeta, in particular, was a thriving business before the war with exports to as far away as China. At the time of reunification in 1990, Planeta was the East German state’s most significant manufacturer employing over 5,500 people.

By 1990s, an agency was set up to dispose of East Germany’s V.E.B.s. Treuhandanstalt, “Trust Agency,” was handed the enormous task of restructuring or selling over 8,500 state-owned businesses that employed four million people. Massive closings soon resulted in 2.5 million employees losing their jobs within months. April 1, 1990, saw Detliev Rohwedder, Chairman of Treuhand, shot dead over civil unrest. Things were bad. What were once world-class printing equipment manufacturers before 1939 became inept and bloated state-run factories that no one wanted.

In 1990, Planeta was the jewel of former East Germany with sales of US$350 million, of which US$50 million came from the United States. Koenig & Bauer would end up winning the Planeta prize and would pay nothing for it, but assume the massive task of pumping millions into bringing Planeta up to western standards. First off, Koenig & Bauer had to offload a third of the 5,500 staff, then supplant West German management into a dilapidated factory to mend 45 years of socialist incompetence. At the time, Koenig & Bauer’s Klaus Schmidt pointed out that they were not getting Planeta for “an apple and an egg” (next to nothing), but rightly so, were taking tremendous financial risks to save the legendary press builder.

Ultimately the sacrifices Koenig & Bauer made turned fruitful as the one weak spot in its product line was sheetfed. At the time the company had sputtered along with a small sheetfed division that produced unusually designed equipment that had a very small following. To help boost its fortunes, a new ground-up design (the Rapida 104) would enter the drupa 1986 trade fair, but with meek interest. The sheetfed program was almost exclusively built at Koenig & Bauer’s Mödling plant in Austria. With Planeta well entrenched in B1 to size 8 presses, virtually overnight Koenig & Bauer became a player in offset sheet presses too. In fact even in today’s latest model Rapida 106, you can see the transfer of technology from Planeta, especially in the gripper systems.

As we look ahead to 2020, Planeta may have saved the company as the majority of Koenig & Bauer’s products have shifted from newspaper and publication web to sheetfed. Koenig & Bauer’s takeover spared an icon of the printing world, which would probably have collapsed along with almost every other East German enterprise and all because of war.

The tragedy of the Iron Curtain has its inception at the end of World War One. Disputes and quarrels most of us don’t even understand, caused by failed leadership, led to evil autocrats that had to be destroyed to save the rest of us. We see this problem again with recent trade disputes and far-right governments erupting everywhere. Where is our sense of history so we can avoid needless disasters of our own making? Planeta was lucky; it found an outstretched hand in Koenig & Bauer.

Global harmony must be taken seriously; no man can be an island in today’s fast-changing world. Our leaders must do better. Business doesn’t like uncertainty. Investment stops when commerce is restricted by borders and trade disputes. Let’s not find ourselves on the wrong side of history again with all lost. Leipzig and Dresden were the epicentres of Europe’s printing industry before the last war and still have not recovered after unification. Who’s to say it can’t happen again?

This article was originally published in the December 2019 issue of PrintAction, now available online.