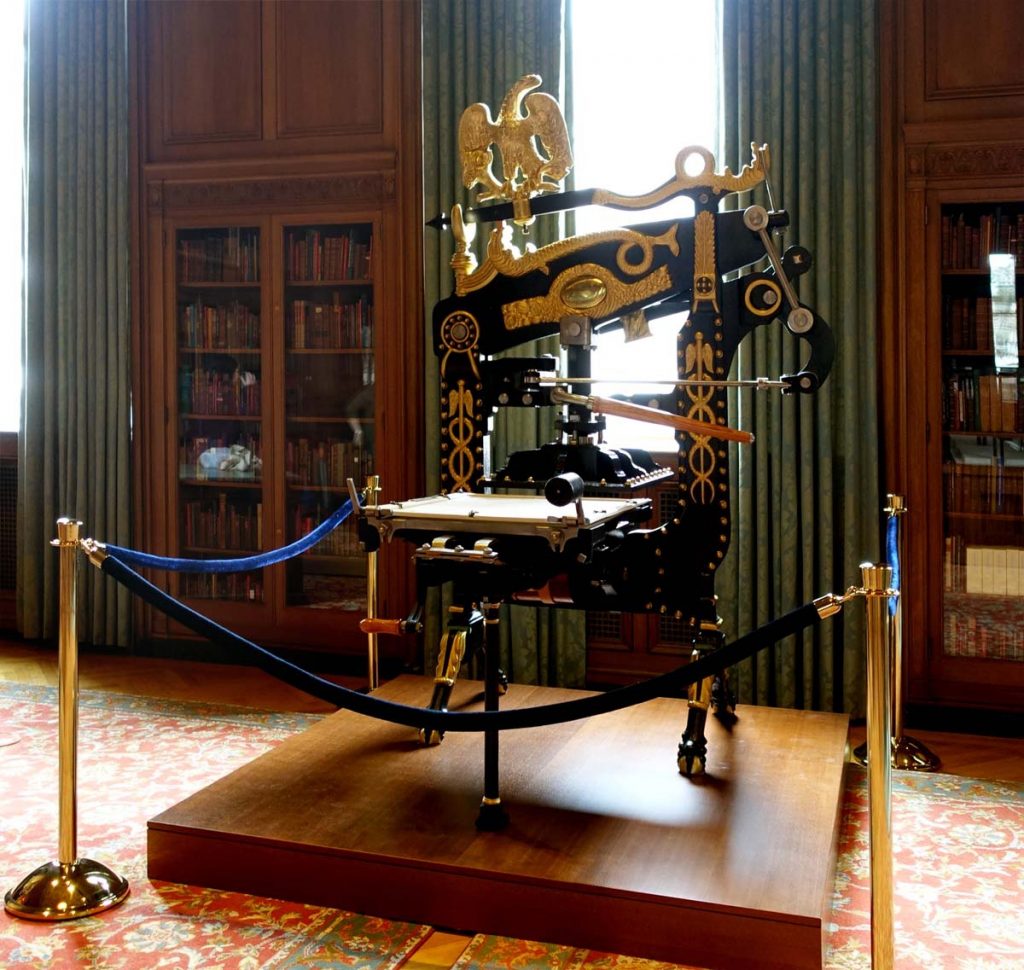 The University of Michigan’s William L. Clements Library recently reopened after 2 1/2 years of renovation, costing more than $17 million. The renovation included the addition of a 1851 George Clymer Columbian printing press refurbished by Mississauga-based Howard Iron Works, which the restorer describes as “one of the most beautiful machines ever invented.”

The 1851 Columbian now sits in the grand Avenir Foundation Room of the Clements Library. Howard Iron Works (HIW) explains it is highly possible that several of the library’s books, more than 80,000 books in addition to some 30,000 maps, were printed with the Columbian style press. HIW, operated by Howard Graphic Equipment, teamed up with Clements Library’s Director, Kevin Graffagnino, in the fall of 2015 on the historical press project. Graffagnino was very specific about wanting to add a mid-1800s Columbian press.

“We are so very proud to supply one of our restored printing presses to Clements,” said Liana Howard of HIW. “It’s an absolute honour to be able to assist Kevin in his dream to showcase the unique and breathtaking qualities of the restored William L. Clements Library. Our restorative skills could not find a more appropriate partner.”

Designed by Michigan architect Albert Kahn, the Clements Library, located next door to the school’s President’s house, is a landmark on University of Michigan’s central campus that holds one of the most comprehensive collections of early American history in the world.

Its name comes from the building’s benefactor, William L. Clements, an Ann Arbor native, University of Michigan alumnus (1882) and former regent of the University, who made his fortune supplying equipment for the construction of the Panama Canal and other major engineering projects at the turn of the century.

As his personal wealth grew, HIW explains Clements began collecting the rare books and manuscripts that make up the heart of the existing collection. Since then the library has continued to specialize in preserving and collecting original primary source documents, maps, manuscripts, correspondence, books, prints, and early photography from 1492 to 1900.

The collection is particularly strong in material relating to the American Revolution, explains HIW. Mr. Clements found the descendants of many of the key players in the Revolution (Lord Shelburne, General Sir Henry Clinton, General Nathanael Greene, and others), bought their ancestors’ papers and brought them to Ann Arbor. Other highlights resulting from more than 90 years of collecting at the Clements include documents relating to the exploration and discovery of North America, Native American history, Colonial Wars for conquest, the American Civil War and the anti-slavery movement, and the move westward.

Howard Iron Works Printing Museum and Restoration is a museum of printing history with a focus on machinery from 1800 to early 20th century. HIW offers restoration work for clients as well as supplies antique equipment to other museums and libraries around the world.