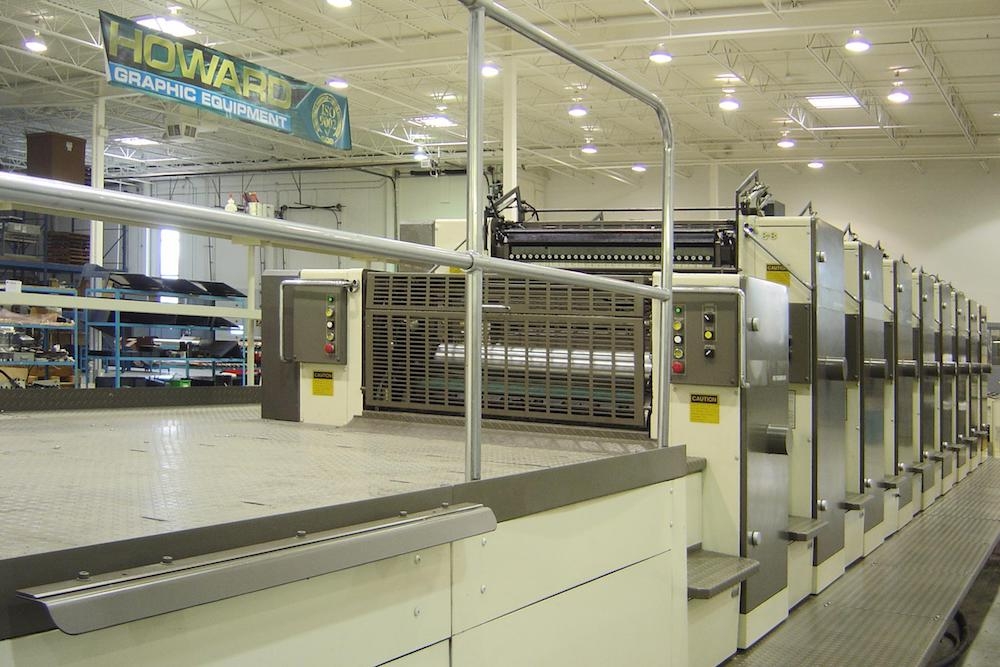 Five years have passed since the dramatic announcement between Mitsubishi Heavy Industries and Ryobi Limited to form a unique partnership and combine their offset press resources under a new name: RMGT. Let’s look back at how this came about, and what the future holds for the steadily shrinking offset segment.

Mitsubishi traces its roots back to 1870 with the formation of Tsukumo Shokai. The early years centred on shipping with repairs and re-fitting of marine transport vessels. Quick expansion led Mitsubishi into virtually every other engineering sector, such as machine tools, steam turbines, vehicles and aircraft. The feared A6M Zero fighter aircraft of World War II still remains a vivid memory for many today. If the projects were massive, Mitsubishi would be right in the middle of it.

After Japan’s surrender, virtually all the colossal Japanese conglomerates were forced to break up. Reluctantly, 1947 saw the group scattered into dozens of smaller entities, only to reunite in 1952. Referred to today as the ‘Three Great Houses,’ Mitsubishi is made up of Mitsubishi Heavy Industries, Mitsubishi Corporation, and MUFG Bank Ltd. MUFG is also Japan’s largest bank. If virtually any material is punched, bored, reamed, injected, electrified, driven, flown or financed, Mitsubishi probably supplied it. Sales of Mitsubishi Corporation alone clock in at US$128 billion today. Then we arrive at the Mitsubishi printing press segment referred to as Mitsubishi Lithographic Presses (MLP).

It wasn’t until 1962 that Mitsubishi Heavy Industries (MHI) set up shop to manufacture offset printing presses. Ironically that same year Heidelberg built its first offset. A single-colour resulted with the mangled name: Super Bijou. Other than the use of a brush dampener pan roller, this little 22 x 33-inch single-colour pretty much stayed at home in Japan. The following year, a first offset web press was built and by 1965, the brand Daiya (its rough Japanese translation means ‘diamond’), was selected as the sheetfed handle. I once saw a press in a printing plant outside Jakarta, Indonesia. On closer inspection, what I assumed was a Roland Rekord two-colour turned out to be a Mitsubishi!

In 1976, an existing MHI factory in Mihara, Japan, was chosen to relocate the fledgling printing division. By 1979, MHI had sold its first web offset to the United States, but it would not be until 1983 that a significant push to export presses to the west would draw any attention. That year, a revised multicolour model designed to supplant an earlier D series began popping up all over America and parts of western Europe. The press, known as the E series, performed quite well in spite of first distribution channels and virtually no advertising. Soon, full factory-owned sales organizations sprung up, and new and better models flooded the West in the coming two decades; 1985 to 2000 would go down in history as the best years of the offset press.

For MHI, a US$38-billion enterprise, the print division was never anything more than a squashed bug on a windshield. Sales tapered by 2001, despite the fact that its Diamond series sheet and web presses performed so well. MHI had also expanded the offering to include 51-inch and 57-inch sheetfeds, as well as specially modified carton sheetfeds.

Ironically, one perhaps forgets that Mitsubishi brought many innovations to the offset press. These include the first full and semi-automatic plate changers, formatting automation, inker disconnect, and variable adjustment of oscillation. The print world soon appreciated the first plate cocking from console feature, which was a godsend. All of these features can be found in today’s competitive presses. Regardless, MHI could see that even though the Mitsubishi name was on all of its equipment, it would never be a number one or two vendor on a world-wide scale without plowing more money and resources into a perceived dwindling segment that returned – at best – meek ROI. The print industry’s sun was setting, in MHI’s mind. The future market for offset equipment would be nothing more than a rounding error on MHI’s balance sheet. Resources could be better deployed elsewhere. Now, what could be done about that?

Where do we find a partner?
In 1943 in Hiroshima, Japan, a company was formed amid the war specifically to supply die-cast products. This technology is usually for aluminum or magnesium metals that are forced under enormous pressure into a steel mold. The process is extremely fast as compared with traditional sand-cast methods but restricted in non-ferrous metals. Think of your car transmission housing, for example. Ryobi is that company, and jumping ahead to 1961, it entered into the duplicator offset press business. Duplicators were all the rage during the 1960s. A.B. Dick, Gestetner, Davidson and Multigraph held the lion’s share. However, demand outstrip supply, especially if what you sell has a price advantage. Japan during the 1960s was cheaper, and both Ryobi and competitor Hamada pounded out thousands of small presses yearly. But rather than remain in the entry-level end of the market, Ryobi soon branched out and in short order, became renowned for its now-famous power tools in 1968 and disparate oddities, such as door closers, handheld cameras and fishing tackle.

There were bumps in the road along the way when developing a name for mid-sized offset presses, but Ryobi persevered. Between 1989 and 2001, Ryobi built Koenig & Bauer’s 28-inch two-colour Rapida 72K under licence for the Asian market. The 2000s ushered in a swath of new models with loads of automation.

One such press was the series 680, closely followed up with the bestselling 750 press that carried a unique sheet size of 24 x 31 inches that Ryobi even dared to find a market for a 41-inch B1 press, 1050.

Probably the most significant innovation was in drying the sheet using LED-UV curing. Ryobi was the first to develop the use of low-wattage LED in collaboration with mega-giant Panasonic. Initially slow to catch on, LED-UV has taken the print industry by storm with every major dryer manufacturer building similar low-energy systems. Using very little power and eliminating the heat associated with traditional UV, LED is a game changer. The technology has continued to evolve with a new partner, the British firm GEW, supplying most of the kit now.

MHI’s press division, tired of print, turned to Ryobi as a suitable partner. A deal was struck January 1, 2014, to form a joint venture with Ryobi holding 60 percent and MHI holding 40 percent of a new entity that would be called Ryobi Mitsubishi Graphic Technology Ltd., now known as RMGT. Meanwhile, MHI couldn’t close down its existing MLP sales organizations fast enough. As it turned out, this marriage proved to have excellent results in both the North American and European markets.

Graphic Systems North America (GSNA) was the new name of the agency for the North American market, and it was having particular success with another odd-sized press, known as the RMGT 9. The nine is an eight-up 25 x 36-inch or the European SRA1 format, reintroducing a sheet size last seen in American presses of the 1950s. Both Heidelberg (SORD) and Miller (TP36) kept the size alive elsewhere, but all the rage in the United States was the 28 x 40-inch. Because of the slightly smaller press, RMGT found it had a price advantage compared to the traditional 40-inch. RMGT reasoned that as long as printers produced page work most of the time, there was no need for a 40-inch. RMGT 9 turned out to be such a success, even Komori and Heidelberg now build the same format.

The 2014 marriage allowed MHI to get on with bigger fish and Ryobi to add existing Mitsubishi platforms, such as the tandem perfector, to its range of offerings. However, the time wasted by MHI in making a decision and then finally getting the new joint venture business up and going, created a vacuum in which other firms, particularly Komori, took advantage. MHI’s poorly understood wind-down confused many of its loyal customer base, likely exacerbated by competitor comments. The industry wanted to know, “are you staying or going, Mitsubishi?” For such a well-organized conglomerate, how could it be that non-transparent in communicating just where it was and what it planned to do? If a clear message wasn’t possible, then both parties should have sped up the joint venture in absolute stealth mode.

Mitsubishi sold plenty of presses between 1983 and 2012, and in the process, made a great many printers loyal in the process. Oddly though, its presses never commanded the respect of others and I could never understand why. We sold a lot of types and models, and to loyal customers. In some regions, such as South Korea and northern China, Mitsubishi was a top seller, to say nothing of Japan where its reckoned MHI held a 45-percent market share. Perhaps it came down to the sales approach — especially in developed countries, Mitsubishi’s initial sales strategy was price. A common Japanese marketing tool is to buy your market share then raise prices as your user base gets more significant. In North America in particular, Mitsubishi seemed never to appreciate just how good its presses were and how loyal its base was. Had it taken more interest and hired the right staff, as it finally did, results may have been quite different, and MHI might not have lost interest. The series 3F, and the later series 3000, were great low cost-of-ownership presses that could match speed and quality with anyone.

As the mouse in this union, Ryobi, with total corporate sales of all its entities – not just printing – of US$2.25 billion seems dwarfed by that of its elephant partner, MHI. RMGT being the junior in this game, is now dominated by the ‘Big Three’: Heidelberg, Komori and Koenig & Bauer, which may not be such a bad thing.
With claims of more than 60 presses sold in the American market alone, it appears these outliers who dared to offer untraditional choices of sheet size and drying enhancements show no signs of going away.

This column was originally published in the September 2019 issue of PrintAction, now available online.