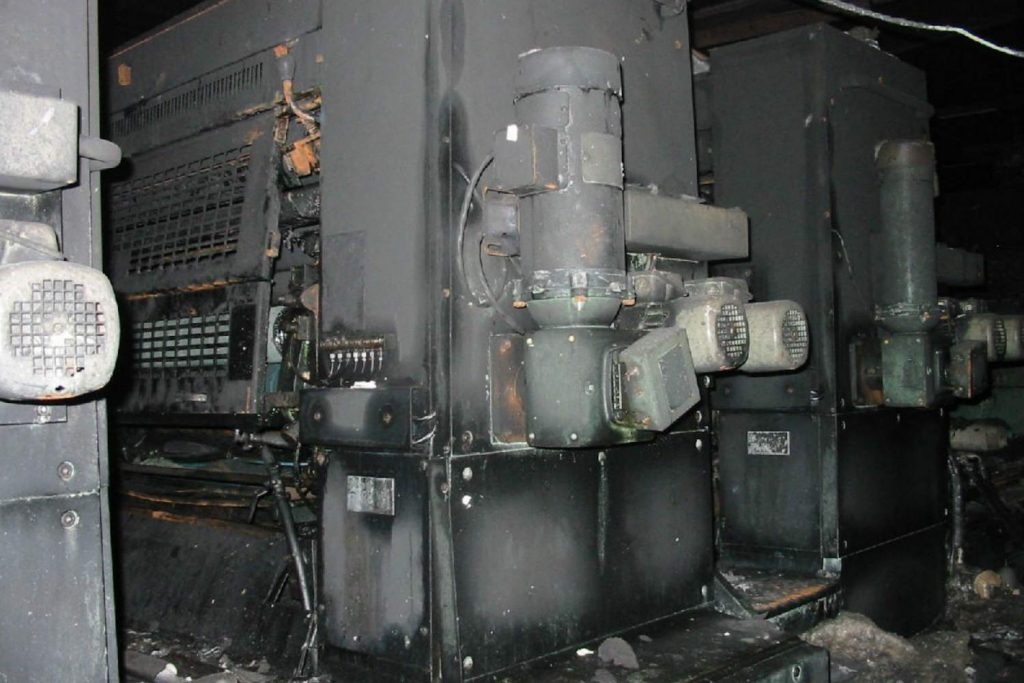 A photo taken by the author, who was evaluating a sheetfed press after being ravaged by fire.

Tips on preparing your business for loss before having to turn unprepared to an insurance claim (originally published in PrintAction June 2016 magazine).

Think taking a terror-filled ride on Zumanjaro is the ultimate scariest you could possibly feel? Then you probably have not been through the life-changing horror of a major insurance claim. No doubt about it, the Six Flags Great Adventure ride in New Jersey is sure to suck the life out of you with its 415-foot drop reaching 90 miles per hour in just 10 seconds. Getting a phone call explaining that your building is on fire or the roof collapsed, however, will overcome any fears of Zumanjaro.

There are so many angles to an insurance claim that it is virtually impossible to write a guidance manual on what to do, how to do it, or – even more importantly – how to avoid the possibility of seeing your hard-earned work collapse in rubble.  But there are ways and means to help prevent insurance catastrophes and I’d like to share some with you.

Protecting your investment
Every establishment has some type of insurance policy, but coverage is such a boring and mundane topic most of us do not dwell on it and quickly file documents away once established. Business interruption coverage is very common, but if a claim is made there is plenty of work the insured must do to prove the loss and this may come as a surprise to some. First suggestion: Keep good records and keep those records updated and in a safe place.

Over the years, I have worked on both sides of an insurance claim. I’ve been hired by insurance firms, adjusters, forensic investigators, public adjusters, as well as the insured themselves. Having seen both sides of the equation, it becomes quite clear how much knowledge and communication is lacking.

A good example is a file on which I was engaged by the insured. This company runs a profitable and well-organized business. A major weather-related structural failure in part of the company’s plant caused half of its machinery to become involved in a serious claim due to water and falling infrastructure. Months later, I was called to come and access some of the damaged machinery.

The claim had gone nowhere and, as is quite typical, the insured called in a public adjuster. Public adjusters are firms that work specifically for the insured and not the insurance company. This happens quite often when things get testy between parties. They are well versed on the protocols of a claim and the mechanics required to settle one. Public adjusters typically work for a percentage of the claim and this comes out of the insured’s settlement. In this case, the machinery sat exposed and rusting in the elements. To make matters worse, the surrounding areas were dangerous and essentially off limits.

At the on-site meeting about the accident, you could cut the tension and anger with a knife. Adjusters are firms that are hired by insurance companies to access and recommend needed steps to get the insured back up and running. Although the majority of adjusters are competent, as with any industry, there are also some disappointments and blow-hards that work to grind the claim process to a virtual halt. Obviously, insurance companies know they have responsibilities but they also want to mitigate the claims and pay out as little as they can. The word mitigate is important here, because it is not as well discussed that the insured must also try to mitigate their claim too, taking any steps to preserve or reduce damage to equipment and furnishings.

In this case, we had a disturbing adjuster who seemed to relish his role and enjoy the fact he was being paid handsomely to travel across the country, write reports, argue the merits of visible damage and drive just about everyone – especially the insured – to look for sharp objects.

Dealing with claims
After months of deadlock, thousands of dollars spent to argue the claim, total disruption of their scheduling, lack of key machinery. which in this case was very specific and hard to replace, it came down to total anger. Usually a competent adjuster can come up with a good plan. He or she knows, that when it comes to machinery, the best the manufacturer can do is provide a ballpark repair quote and a new replacement price. But what happens when the repair comes without a firm warranty? In almost all cases, it does not. And so the claim discussion moves forward around getting new replacement machinery, which is a significant discussion point to understand.

Talk to your agent and tell them you wish to be covered for full new replacement. If not, the claim continues down a rabbit hole: “The press is 12 years old? Then we need to value such an asset prior to the claim.” This is the essential problem and an active files quickly becomes a bickering and depressing period that can take years to settle and will in the end, probably – surely – mean you will come out of the whole ordeal worse off than you were before. Even with various opinions and quotations (for repairs), if the adjuster is lacking in specific knowledge and does not go out and seek someone who can provide this, then it may be impossible for both the insurer and the insured to agree on a fair settlement.

There is, of course, another side to the insurance business in faulty claims or at the very least a case of very suspicious origins. We were called in by an insurance company over a claim to do with one machine – almost brand new. The story was an apparent break-in and vandalism on the press. Rags and paper were set alight placed on various parts of the press and a few control cabinets were tipped over. The heat activated the sprinklers which then put out the fire but drenched everything in the plant including offices.

There was something wrong here. I felt it and was rather surprised when I discussed my thoughts with the insurance rep. He didn’t much care really. He told me that the integrity of the insured really didn’t matter much. Insurance had to quantify the claim and close the file. But this was an exception and it should be noted, having worked many times on the insurance side, very little is left unknown when investigators get to work. They will know where the “oven” is, which is the term used by insurers in reference to the initial location of a fire. They will also be able to track the damage and spot oddities like accelerants. Forensic work like finding out about the financial wellbeing of a claimant is the norm not the exception. In the end, this printer was forced to close.

When there was still a very healthy business climate for printing machinery, we regularly bought and rebuilt countless machines. I remember one purchase vividly from in 1994, shortly after southern California had a major earthquake. Bridges collapsed, buildings were damaged, and all sorts of businesses had claims. One damaged printer had two 40-inch presses – a 6-colour and a 5-colour. The claim was settled before we were involved and I went to look at the machinery, which was now dismantled and sitting outside in a temporary tent.

The manufacturer’s service manager was there and he tried to explain to me that the earthquake had uplifted the machine from its leveling feet and somehow twisted the frames. His evidence was one elongated hole which was part of six holes on each unit that were bolt holes for assembly. One hole? Clearly whoever had taken apart the press had a whole lot of trouble getting one bolt out! There was obviously no damage to the frames – it was all nonsense. But the printer did get new machines and we did bring both machines back to life and eventually resold them. Some common sense could have saved somebody a lot of money.

Many damaged machines came through our plant: Lightning strikes, floods, transit (by water or road), but the most damage by far was caused by fire. Delivery fires are common – caused by filthy deliveries with lots of spray powder. Dropped sheets mixed with very hot infrared or UV lamps can cause tremendous damage.

Overheated motors such as ring blowers near the delivery, are another common reason. An obvious remedy is to keep machinery clean and free of debris. Another suggestion few think about is to have plenty of fire extinguishers around and know how to use them. This last one would have helped a UK company after its 6-colour double coater and double dryer (LYYLX) was set alight via a dropped sheet and interdeck UV lamp. That press took us over 6,000 man-hours to restore.

Insurance common sense
Over the years, we must have been involved in over 30 substantial rebuilding projects. Almost all were equipment that we purchased when a claim was settled. I learned to quantify costs of repairs using some basic grade-nine chemistry, calculating what temperatures were reached, how it affected the guts and understanding how cast iron has a memory. Heat-twisted cast iron will return to its original position with re-heating. Fires that occur near melted polyethylene and polypropylene (plastic skids for example), produce toxic gases and when mixed with water become an acid that will attack bare steel and cast iron.

I still see a great deal of waste within the insurance claim process when the wrong so-called experts are in a position to determine repairs. A good talker can needlessly cost both sides a lot of money.

So far I’ve yet to meet any insured who felt that they came out ahead after a claim. This should be a warning to everyone, that even though we have insurance, in the end, after all the pain and disruption, you will often wish you did not file a claim. Insurance is important and can save a business, but do not assume you’ll finally get rid of that old machine or upgrade your whole plant simply because you have business disruption coverage and replacement coverage. Take steps to protect your investments now. Do simple things like buy more fire extinguishers, improve your housekeeping, and update your records.

If a disaster happens, take steps to reduce your claim and get solid advice from a professional. Be completely honest and upfront. Do not try and pile-on things that will be spotted as marginal by a good adjuster. One final suggestion: consider increasing your deductible. You should be trying to prevent a life changing moment not small repairs like as a bolt going through a press. Raising your deductible can lower your premiums and even afford you the budget to increase your protection if and when the big claim hits.

That’s about all you can do and it’s really important that you do it now before something horrible happens. Zumanjaro is nicknamed the Drop of Doom. But you know that when you buckle in. Insurance claims can have the same moniker but be even more terrifying and without warning.