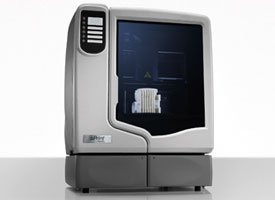 Hewlett Packard announced yesterday it will be working with Minneapolis-based Stratasys to bring a line of HP-branded 3D printers to the market. The machines, mainly used in the engineering and mechanical design fields, will start entering the marketplace by the end of the year.

“There are millions of 3D designers using 2D printers who are ready to bring their designs to life in 3D,” said Santiago Morera, VP and General Manager of HP’s Large Format Printing Business. “Stratasys FDM technology is the ideal platform for HP to enter the 3D MCAD printing market and begin to capitalize on this untapped opportunity.”

Stratasys produced its first 3D printer in 2003 and last year broke through the US$15,000 barrier with its entry-level machine, which fits on a desktop. The machines build 3D objects by a process called FDM (fused deposition modeling). In essence, layers of thermoplastic are laid down based on CAD specs to form a three-dimensional prototype. The final product can be used in models, or even to create production parts.

“We believe the time is right for 3D printing to become mainstream,”
said Stratasys Chairman and CEO, Scott Crump. “We also believe that HP’s
unmatched sales and distribution capabilities and Stratasys FDM
technology is the right combination to achieve broader 3D printer usage
worldwide. HP has made a similar move in this market before, capturing a
dominant position in large-format 2D printers. Together we hope to
repeat this success with 3D printers.”