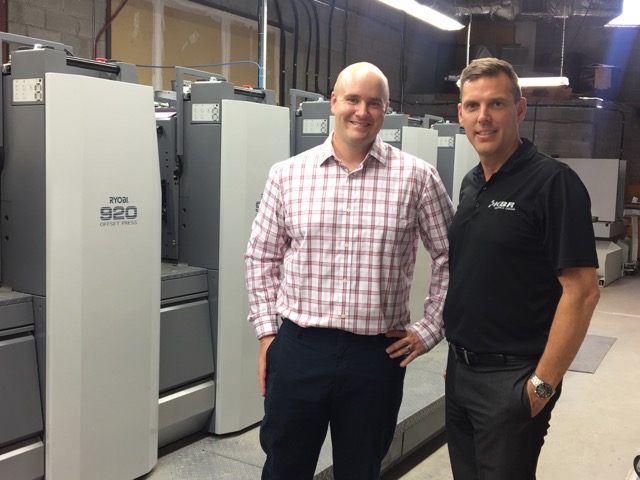 Hueneye of LaSalle, Quebec, one of the region’s only dedicated trade shops, has installed a five-colour RMGT 9 Series press with coater purchased through Canadian dealer KBR Graphics.

Hueneye has 30 full-time employees housed in a 12,000-square-foot facility. “We needed a compact footprint,” said Mike Green, President of Hueneye. “The 9 Series’ [maximum] sheet size of 25×36 inches is the majority of our work now. We are printing flyers on gloss, 16-page signatures for booklets and brochures, and even 23×35-inch posters in varying quantities ranging from 250 up to 100,000 sheets.”

Green notes production efficiency is gained through the SMART RPC technology on the RMGT 9 Series press, including: fully automatic plate changing to support the frequent job changeovers and the diverse small-lot printing done at Hueneye. The RMGT 9 Series press also allows Hueneye to expand its business by tackling eight-up projects, and not being limited to a six-up format.

“We serve ‘jobbers,’ so we’re always looking to fill in holes on the press sheet,” said Green. “The larger format is particularly convenient for running book work more efficiently.”

Green continues to explain Hueneye has seen additional cost savings by reducing the amount of outsourced work and the fact that the 9 Series press consumes less electricity than a larger press. “Plates for this press are roughly 30 percent cheaper than for a 28 x 40-inch press because their pricing is based on square inches,” said Green. “We can run the 9 Series press with one operator, which we could not do on a 40-inch press.”

In late August, KBR Graphics, which is celebrating its 40th year in business in 2016, expanded its distribution of RYOBI MHI Graphic Technology sheetfed offset printing presses to include all of Canada. Previously, KBR Graphics had been the RYOBI MHI Graphic Technology (RMGT) distributor in Central and Eastern Canada since 2012. In mid-July 2016, the company also moved its head office to a new modern facility in Laval, Quebec.