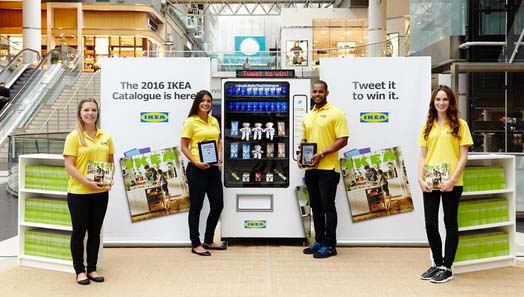 The Grab Life by the Catalogue tour kicked off on August 20 at The Toronto Eaton Centre.

This month, IKEA Canada is promoting the arrival of its 2016 catalogue with the use of Twitter-activated vending machines that dole out gift cards at specific store locations across Canada. The company, which scored a resounding success last year with its bookbook catalogue video promotion, now with close to 18-million views on Youtube, has titled its newest initiative “Grab Life by the Catalogue.”

Over the last two weekends in August, all IKEA Canada stores have installed what the company refers to as social media vending machines which, at the push of a button, gives each user a unique #PIN number that when tweeted to @IKEACanada with #GrabLifeByTheCatalogue, will generate a variety of prizes, including the opportunity to win a grand prize.

“We know that Canadians like to engage and connect through social media,” said Stefan Sjostrand, President, IKEA Canada. “Throughout August we hope to excite our customers about the new 2016 IKEA Catalogue and inspire them to turn their dream home décor projects into reality.”